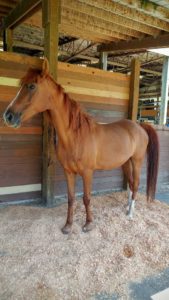 Gracie is a sweet and elegant half Arab mare who was surrendered to SAFE in July 2016. Her owner’s declining health and finances made it impossible for her to continue to care for her. She’s not been ill treated but she’s essentially spent the past 6 years turned out to pasture. As a result, she’s gone far too long without basic care, like teeth floating and regular farrier work. She came to us with badly cracked hooves, and teeth in desperate need of floating.

Since taking her in, we have been contacted by another past owner who provided us with full medical records as well as her AHA registration papers.

Gracie spent a few weeks in quarantine at Safe Harbor, giving us the chance to get to know her. She’s an incredibly sweet and affectionate mare, who nickers all the time. She nickers when you put on her halter, she nickers when you pet her or talk to her, she nickers as you walk past her stall. She really likes people! She also gets along wonderfully with the other horses she’s been turned out with.

Because she’s been turned out for so many years, Gracie definitely needs some refresher training before we can offer her as a riding horse. She does show some anxiety about things like girthing, so we’ve started her on groundwork. Like many of the mature horses that come to SAFE who have been shaped by the good and bad experiences in their lives, Gracie is not coming to us as a “blank slate.” She’s had to rely on herself for basic survival for so long that it can be difficult to connect with her at first. Being independent is her way of keeping herself protected, so it’s kind of her go-to frame of mind when being asked to do things. This is not to say that she’s disobedient…far from it! She’s quite cooperative and willing on the ground. It’s just that she sort of zones out during groundwork, and connecting with her is not easy. But the sparks of trust and connection are there, and with continued slow and patient work, she will come to understand that we mean her no harm, and in fact she can look to us for direction and reassurance when she needs it.

Physically she is in good shape, except for her feet and her teeth. Her feet were badly neglected and cracked when we took her in, and she is going to need probably 4–5 months of remedial farrier work to correct them. She’s had an initial float done, but again it’s going to take quite some time before her teeth are normal. She has such severe waves and shearing in her molars that the act of chewing forces her food outward into her cheeks. As a result we see a lot of quidding from her. The plan is to do another float in 3 months and again in 6 months. Because she’s relatively young (for an Arab!), our vet is hopeful that it is not too late to make significant improvements to her teeth. 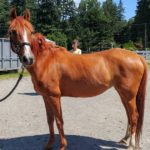 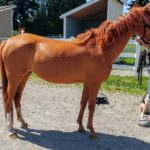 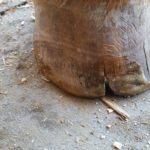 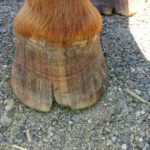 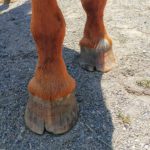 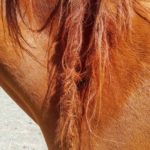 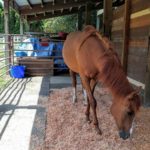 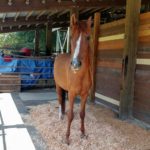 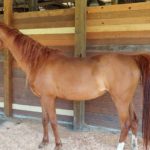 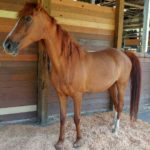 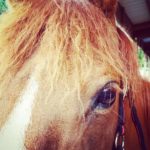