Mesquite left early this morning for Vancouver WA where he will join his friend Hickory in training with Joel Conner. You might recall that Joel rode both boys at his clinic at SAFE in mid-August. Now they’re both going to get the start they need to be saddle horses.

Before he left, volunteer Lisa G did a bunch of work with Mesquite to get him ready for Joel. She shared this report with us:

“I had the great privilege to work with one of our “smokin’ hot” new Arab boys, Mesquite, at the recent Joel Connor clinic in August, a few days prior to the clinic, and in the weeks since, and all I can say is what a guy!! The first day I lunged Mesquite as part of his post-gelding PT, he moved right off with hardly a speck of attitude (surprising for so being so recently studly!), quickly figured out when I was asking him to tune into me and change pacing and direction. After only a couple of sessions introducing Mesquite to some groundwork and working on getting him “gentle” in preparation for the clinic, Mesquite showed off his amazing attitude and intelligence when Joel used him in his colt starting demonstration the first morning of the clinic, accepting a saddle and for the first time with very little fuss.

Working among the other horses in the afternoon portion of the clinic, Mesquite very quickly focused in on me and was working beautifully on a nice loose lead, responding very well to body language and incredibly soft cues. He was a little tense physically throughout, finally relaxing and softening only towards the end of the session. 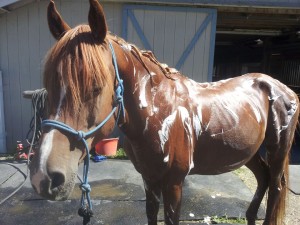 Freshly armed with new and refreshed information and tips from Joel, Mesquite and I have since been working primarily on moving off of cues with a relaxed, soft feel as opposed to jumping into the work with a tense neck, wrinkly nose (seriously, he looks like he’s smelling something foul when he’s tense or bothered; it’s adorable, but a nice smooth nose is much more encouraging!), and nervous air… and, once again, this boy’s ability and willingness to learn and accept new situations was amazing! One week after the clinic, Mesquite was introduced to a hose (to cool off after a good work session on a hot day), and, after showing him that it was okay to move, but to do so softly and the hose was still going to be there and that was OKAY!, he stood very calmly and let me hose all but his tail.… and two days later, he got his first bath!! What a CHAMP!

My last session working with Mesquite before he heads off to train with Joel was on Sunday, and within 5 minutes of working, he was moving in perfectly even, soft circles with a lovely relaxed poll, drifting his hindquarters out and shifting smoothly into the trot. Disengaging his hindquarters on the right track is still a little bit of a challenge for him, but he was reaching beautifully, softly bent, without sticking his face straight at me (another “I’m doing it but NOT LIKING IT” sign from him). Another challenge for Mesquite has been backing away from me with space between us and a loop in the line; he would raise his head, get those nose wrinkles going, and big wide eyes… but SUNDAY, he just had this, “K, coo, whatevs” attitude and it was a beautiful thing.”