We have a new horse to introduce. This is Sophie. She’s a 2 year old TB/QH filly that was surrendered to SAFE this morning. She sustained a bad injury to her neck about 3–4 days ago when she was impaled on an uncapped t‑post. The wound was not treated, leaving a gaping hole. Once we got her to Safe Harbor, she was seen by Dr McCracken, who was utterly amazed at how lucky this filly is to be alive. She told us that had the t‑post gone in a few millimeters lower, it would have punctured her jugular. Had it gone a few mms deeper, it would have punctured her esophagus. Dr McCracken cleaned the wound out as best she could, and she thinks it should heal fairly well as long as we keep her quiet until it’s built up some granulated tissue. We’re all pretty much head-over-heels for this little girl. She is the sweetest and BRAVEST horse in the world. Really something special. We’re keeping a close eye on her to make sure that her healing goes the way it should, and keeping fingers crossed that there are no complications.

Sophie was named by a former SAFE volunteer and current SAFE supporter who won one of the “Name a SAFE Horse” opportunities at Heart this year. She came out to Safe Harbor to meet the new girl and decided that Sophie would fit her very well! 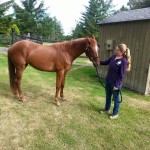 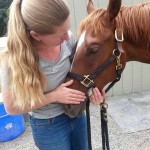