Banjo was surrendered to SAFE by his owners on the recommendation of City of Snohomish animal control officers, who discovered the gelding had not received basic vet or farrier care for more than five years. The horse had gone unhandled for many years as well, making it tricky, but not impossible to catch him. He was immediately sent to NWESC to be evaluated. Banjo’s hooves were terribly overgrown, but instead of having the “slipper feet” we usually see in these cases, his hoof walls were not curled under or split…they had just grown straight down until his soles were literally three inches off the ground and it was as if he was walking on cups! Other than his hooves, teeth, and a mild heart murmur, Banjo was in decent health. His behavior, despite years without handling, was pretty decent as well. With a halter on, he has been easy to catch in his stall, and his reaction to being asked to move his feet, stand still, etc has been quite reasonable. He appears to be quite teachable, so we feel that with some refresher training, he could quite possibly be a nice companion horse for someone. Since his intake, he’s been trimmed by farrier Daphne Jones, and we are cautiously optimistic that he’s may be sound…so a future as a light riding horse is not out of the question for this fellow!

Banjo was named by Ann R, who won the “Name a SAFE Horse” package at Heart of the Horse! Thank you, Ann, for giving Banjo a new name to start his new life! 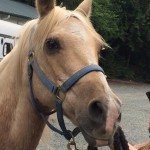 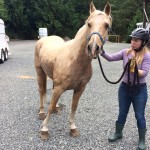 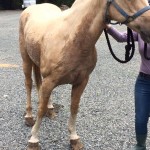 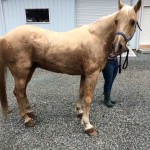 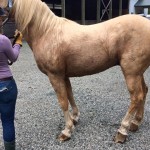 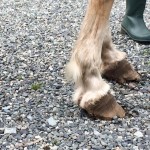 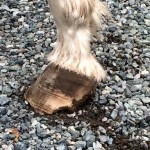 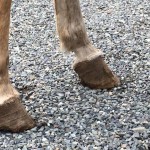 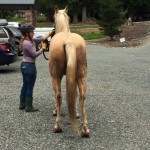 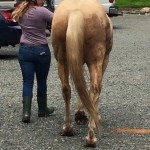