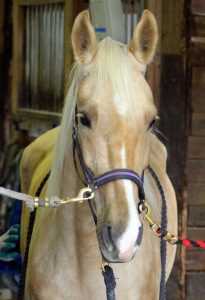 Phoenix had a hard month concentrating under saddle. He continues to look sound on the front but does come out of his stall pretty stiff both in the front and hind. He had quite a few naughty days this month mostly due to work, noise, and activity at the barn that made him anxious. He’s up to 10 min of trot per workout now and should be adding 5 more minutes per week after that. He has also been working on trailer loading and has carefully made his way all the way into the trailer a few times!

Lola has had a very good month. She went out on a trail ride to the watershed with Skye. She was initially reluctant to lead the way and about an hour into the ride I felt she was ready. We moved into sharing the lead with Skye and then as she gained her confidence we took the lead. She was a great girl and led the rest of the way home! She trotted and cantered in the lead, was easy to bring back down and was not afraid by even a bicyclist who came around a bend. This girl has come a long way this year. She is ready for a great forever home who wants a fun mare to enjoy both arena and trail work!

Cameo was a great girl all month. We are trying her on a magnesium supplement to help with muscle discomfort and calmness. After about 2 weeks on the product, I could see a change in her attitude. It may not be something she needs forever but it seems to be helping take some of the edge off and helping her focus. She still takes a few minutes to smooth out when I initially get on but once she does, she has a very nice trot and a lovely canter. She still has a hard time picking up the correct lead on the right. Without a rider, she has no problem picking it up, but under a rider, she gets off balance and falls over the right shoulder. We are working on keeping her balance and this should get easier. Our goal with Cameo for October is to get her more relaxed about trailer loading so that we can take her out somewhere like Bridle Trails for an easy trail ride.

Skye has been really working hard to change her work ethic and she is making steady progress. When she came home from training, she still had quite an objection about going forward under saddle, but it’s hard to say if that was due to lack of fitness or some sort of mental block. But with improved athletic conditioning, her willingness to go forward has improved considerably. Plus she’s lost some weight as well as more time miles under saddle.

It is important that this big girl has a relationship where she understands clearly what is being asked of her and learns to answer requests with respect. Over time, she’s come to realize that she’s pretty big, and she holds herself in pretty high regard. I like the confidence in her personality but she needs to also listen to her rider. In the herd, during turnout, she is quietly bossy and typically pushes through whatever’s in her way to get to where she wants to go. But she is learning that with humans she can’t get big and pushy. Her ground manners are greatly improved and her willingness to load and unload calmly from the trailer is much better. She still needs some practice getting out of the trailer slowly but it’s getting better every time. Skye went on three trail rides last week, and was a very good girl. I think she has found her calling, out in the woods as a trail horse. She looked very happy to be out of the arena and outside in the open air. 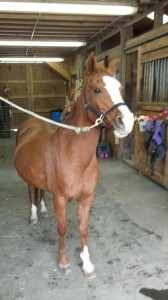 Skittles continues to be a gem in every possible way. We have had her on a glucosamine supplement for 30days. She is looking and moving well but continues to experience weakness on the right hind. While it doesn’t seem to give her a tremendous amount of pain but it is evident that she has trouble bringing it completely through and motion in the stifle maybe limited. Her canter leads are improving and she is able to pick up that difficult right lead correctly but still makes some mistakes.

Emmy is as sweet as ever! She is easy to groom and handle and likes other horses but doesn’t squeal or get overly excited. I have been sitting on her, getting her used to leg pressure and light guiding reins. We have trotted on the lunge line and she is getting more responsive to my seat and leg. She still does not like pressure on the reins but she is accepting it more each ride. After her recent visit with the chiropractor, her ability to turn to the left was greatly improved and she seems to be less uncomfortable when turn her head to the left. She does have a slight head wag in the trot when she is at liberty as well as on the line. Nothing too troublesome, just something to note that may go away as she gets more balance and strength. Her canter to the left needs a lot more balance, she goes into “motorcycle mare”…dropping her inside shoulder and losing her hind end out behind her. These are all things that will improve with more balance work.