Phoenix is doing great! The main concern with him right now is a little bit of a swollen left hind hock that I am keeping an eye on. I think he probably overexerted himself somehow. Other than that, he is doing really well and I took tons of hair off him yesterday. I need to change his name to Phoenix the Photogenic, because he takes GREAT photos! 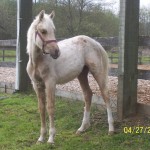 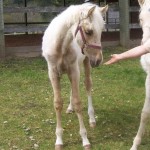 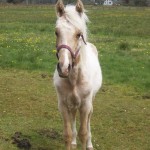 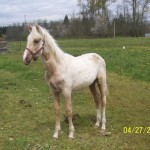 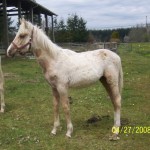 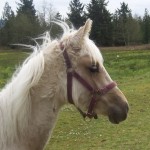 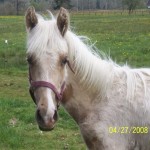 Update May 1, 2008:
Poor little Phoenix. Hannah came out today to check on his still very swollen right hind hock. He was off on it but not terribly lame, but it is very distended and full of fluid. Hannah thinks he probably twisted it, but to be on the safe side she wanted to get the inflammation down which can lead to long-term arthitic issues, so she sedated him, injected the hock and drained some of the fluid out, and then injected hyaluronic acid, a small amount of steriod, and some antibiotics into the joint. She then rubbed Surpass (topical bute) over the joint and put a pressure wrap on to try and get the inflammation down. He needs to have it iced/cold hosed a couple of times a day and have the Surpass applied, for a week. Hopefully he will be ok!

Update: May 3 2008:
On Wednesday the boys were playing a lot — rearing and running around. Phoenix seemed to be the dominant one, and was doing lots of stalliony things like biting at Sinatra’s hocks. Sinatra was trying to move him off by kicking. Perhaps he connected or it was just a twist from the extreme exercise. They have stepped up their game quite a bit. When they were both rearing up it was pretty impressive! I ran to get the camera but of course things were relatively calm by the time I got there. There was still lots of challenging/dominance play that went on for about twenty minutes.

They were quiet on Friday, just walking up when I went in to fill their water and asking for scratches (well, Sinatra asks, Phoenix then doesn’t want to be left out, so he tolerates). I remember the day that Jaime told me touch his back and my hand sank down an inch and a half on either side of his spine. Now they have flesh there. Their haunches, too, are beginning to develop just a hint of roundness.

While I was wishing for them to have the big pasture next door to really let loose in, maybe its good that they don’t.… Young horses need to move and play to develop their bodies — it is always hard to keep the balance between wanting them to move and not wanting them to get hurt. Their own judgement is notoriously unreliable!

May 3, 2008:
Unfortunately, his hock doesn’t look better yet, in fact it looks worse. Monica, this is something he did at least a week ago. We noticed it a week from yesterday. Hannah doesn’t think he was kicked, she thinks he twisted it, but it could be.

My instructions from Hannah were to cold hose or ice the leg twice a day and put Surpass on it at least once a day, and keep it wrapped. Well, easier said than done. Phoenix is still very skittish and trying to do this by myself has proved nearly impossible. I did get the wrap that Hannah put on off (by cornering Phoenix in the stall, with him shaking the entire time), and put Surpass on it yesterday, but that’s as far as I got without help. By the evening, without the wrap, his hock had swelled even more and now his lower leg is swollen as well. Allison is coming today so hopefully she can help me with it. Hannah wants me to keep it bandaged as well but without help and now that I am working again it is just not possible. I need help…Valerie?

May 6 2008:
We are not so much concerned about the swelling in the lower leg. This has mostly gone away after the first day and seemed to be a result of the pressure bandage the vet put on the hock area. The rest of the swelling is in the joint capsule itself and it is likely his left hock joint will always be somewhat distended. The vet looked at it yesterday and we are to continue with the cold hosing, wrapping and topical Surpass. In a week if it hasn’t improved we will need to have xrays taken. He is off on it but not seriously lame. Cold hosing yesterday was a battle, we tried tying him to a post outside my arena to see how he would tolerate that so that it can be a one-person job, but that resulted of him trying to jump into my arena and breaking one of the fence boards. However, Valerie was able to cold hose him more successfully today.