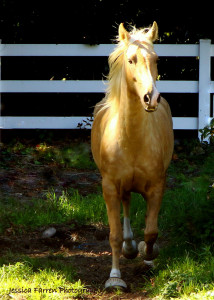 Volunteer rider Jolene Duncan has been spending some quality time with Phoenix. When we talked about project horses Jolene could concentrate on, I was very happy she was willing to take on training with Phoenix. We both agreed that what this beautiful boy needed was a lot more consistency in his riding and training. With Jolene working him four times a week, her hard work is really paying off. The two are forming a great bond and as a result, Phoenix is moving forward in his work.

Here is a little about Phoenix in Jolene’s own words:

“Phoenix has been feeling incredible the past couple weeks. His trot has been a big focus as his tendency is to become tense and move incorrectly in it. Usually when he is doing this, his head will come up (not unlike a giraffe) and then his back hollows. Lately, however, Phoenix has been letting go of this and really trying to move correctly and freely. When he does, it is a wonderful ride. He has worked really hard at being in tune with the rider’s seat and goes with the speed they ask. At the end of last week, he was feeling so good and so with the rider, we started experimenting with the beginnings of what will eventually be a flying change of lead. It is an interesting place for Phoenix though. You can watch him get frustrated as he searches for the answer but feels he can’t quite make the leap yet. He is a smooth ride, when guided with patience and understanding. Too much correction and Phoenix, who has such huge try, can shut down.”