We’re happy to say that Portland’s recovery has continued and he’s now officially up to a good weight (4/9 as determined by Dr DeWard) and looking healthy. Now that he’s got plenty of good food to eat and no mean horses beating him up, he’s truly enjoying life again, which is wonderful.

We had Portland examined by Dr Bob DeWard and asked him to evaluate Portland as a potential riding horse. SAFE board member Kyle Putnam, who is Portland’s fairy godmother, has been concerned for some time now about the battle scars that she’s observed on his legs and body, and Dr DeWard’s findings do support her suspicions that Portland may not end up being a riding horse. 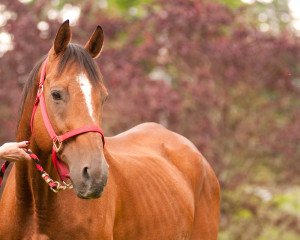 Dr DeWard determined that both of Portland’s knees are arthritic, with fairly severe reduction in range of motion in both joints. There is quite a bit of bony growth and remodeling in his knees that not only can be felt when palpating, but can also been seen when you examine his legs, and this may worsen as he gets older. Portland also has a reduced range of motion in his lower legs (fetlocks, pasterns, and coffin joints) but without the bony thickening present in his knees. He has several scars on his forelimbs as well as on his hocks. His hocks also show visual evidence of arthritis including bony thickening and remodeling. His right stifle joint is mildly to moderately filled with fluid. He appears to have suffered an injury to his sacra-iliac joint at some point in the past, with a possible fracture to the right illial wing. He has limited range of motion in his hind limbs, poor muscle tone, especially in the back & hindquarters, and is mildly swaybacked.

Dr DeWard’s opinion that this Portland would make a suitable companion animal, but is a poor candidate for riding. Competitive riding is out of the question. He says that the argument could be made that low intensity exercise under saddle would be acceptable, but he would discourage any rider over 80 pounds and strongly recommends that exercise be limited to walk only on level ground with good footing.

On the positive side, Portland is healthy with good teeth and good feet. As long as he can stay comfortable, he should be able to enjoy life as a companion animal. He certainly deserves a safe place to live out the rest of his days in the company of humans and horses who will treat him kindly.

If you would like to take a look at Portland’s complete medical report from Dr DeWard, you’re welcome to download it by clicking here.