Ru Gets his Teeth Fixed

At the end of January, Dr. Fleck came out to sedate Ru and perform a dental procedure to take down excess tooth on his lower incisors. He has a mild underbite and, likely due to lack of dental care in his past, they had grown in a way in which they ended up being pushed out of their normal position. If the teeth were left as is, he would end up having trouble eating due to the abnormal occlusion that it would create in his mouth.

Unfortunately, Ru was not amenable to the procedure. Even under standing sedation he objected strongly to the drill touching his teeth. Dr. Fleck said at that point the only way we were going to be able to finish it would be to come back another day and do the procedure under general anesthesia on the ground. 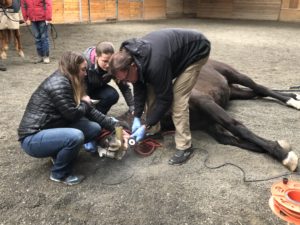 Dr. Fleck, Dr. Lewis, and their licensed veterinary technician, Cheyeanne, came out a few days later to finish the job. The procedure went flawlessly and Ru is now a happy camper with normal teeth! With continued proper dental care, he shouldn’t have a problem like this again.