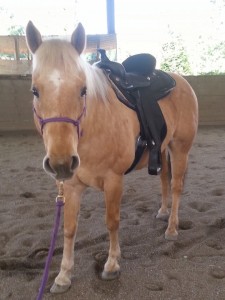 Mr Finn was a superstar yesterday! He wore a saddle for the first time since coming to SAFE and was completely unfazed by the experience. Terry says was a perfect gentleman! Way to go, Finn!!

As we’ve mentioned before, when we took Finn on as a SAFE horse, we were told that he was not sound for riding due to an injury he sustained when he was started under saddle as a young horse. He has a consistent lameness on his RF at the trot. Putting the saddle on was an experiment to see how he would react. We don’t know at this time if he will accept a rider with as little excitement as he did the saddle. Terry is in the process of trying to arrange the donation of a lameness exam so we can hopefully get some information about the nature of his injury and whether or not it is treatable. We should know more in a week or two.