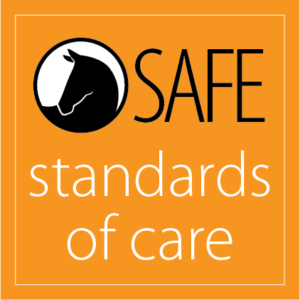 It pays to be flexible when dealing with horses. But there is one thing that SAFE is not flexible about: our gelding policy. All colts and stallions coming into SAFE are gelded as soon as they are able to safely undergo the procedure.

Among horse rescues, this policy is nothing out of the ordinary. Most reputable rescues do the same thing. People in rescue understand that rescues are needed in large part due to irresponsible breeding. Simply put, there are more horses than there are good homes for them. And one surefire way to ensure that fewer unwanted horses are born is to prevent stallions from breeding by castration. It’s that simple.

Overbreeding is a serious problem, but at first glance, you can almost understand why it happens. Foals are magical. Who wouldn’t want one? They have tiny hooves and fuzzy chins. The day after they’re born, they run circles around their mothers just for the sheer joy of it. Trouble is, foals grow up. Before you know it, you’ve got yourself a horse that eats expensive food, poops 50 lbs of manure per day, and can turn a green pasture into mud faster than you can pay your vet bill. That’s a whole lot of responsibility in one 1,200 pound package! But for some reason, people don’t seem to think about that when they’re contemplating breeding their mare. And what happens to these former foals when they become too much responsibility? The lucky ones end up at rescues. Many more of them end up at auctions and feedlots, which is a road leading straight to the slaughterhouse.

So, we do what we can to slow down irresponsible breeding by ensuring that the colts and stallions that SAFE is responsible for cannot breed, whether on purpose or by accident. The veterinary procedure to geld a stallion is relatively simple and uncomplicated. Most horses bounce right back afterwards, and as long as the aftercare is done properly, there are no lasting effects. I’d estimate that SAFE has gelded about 25 stallions (not including those done through our Community Outreach Program) and we’ve never had a horse suffer any serious ill effects. Our expert veterinarians have gelded stallions for us that were older than 20, and while more care must be exercised to prevent blood loss or other complications, these procedures have been as successful as the ones done on much younger horses.

Attempting to stem the tide of unwanted breeding is one reason we geld colts and stallions, as I’ve explained. But there are other reasons that are just as compelling.

For one thing, stallions can be very dangerous creatures. A large powerful animal focused on sexual reproduction doesn’t exactly have to concern himself about what puny humans want him to do. “Stallion-like behaviors” include posturing, screaming, biting, striking…all very aggressive stuff. This is an animal driven by hormones and instinct to find mares and pass on his genes. Over the years, I’ve heard several people say that they have no plans to breed their stallion, but they’re not willing to geld either. They insist that their stallion has impeccable manners and never misbehaves, even around mares. These people aren’t talking about royally bred Warmbloods or show ring champions…just ordinary horses. I literally do not know what to say when faced with such an argument. 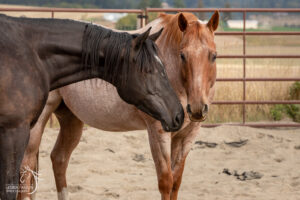 The other compelling reason to turn a stallion into a gelding is quality of life. Stallions often live their lives in isolation because they’re difficult to handle and they’re a danger to other horses. Horses by nature are gregarious creatures who find security in the company of other horses. Having gelded so many stallions at SAFE, we’ve had the privilege of watching new geldings form their first friendship with another horse. There is nothing better than seeing a formerly isolated horse relax in the company of newly found friends. They groom each other, they grazing together, they play dumb gelding games. They get to be HORSES. And it doesn’t stop there. They also can form relationships and partnerships with humans! Without those hormones surging through their veins, they can learn new skills and enjoy new experiences. Gelding hasn’t “ruined” them; it’s opened up a whole new world. And the world is filled with wonderful geldings with great personalities, athletic ability, and talent. We love to say that we’ve taken a stallion and turned him into a happy gelding.

So our gelding policy is firm. But it’s upheld with the best interest of the horse firmly in mind.