Now that we have “officially” adopted Sasha, I can share these photos of her. Sasha was one of 7 horses we “boarded” for Snohomish County Animal Control, beginning in early March, after being spending the first couple of weeks after the Elledge seizure at the Enumclaw auction.

When we went to pick Sasha up, we were told she was not halter broke, and she was not wearing a halter. Therefore, I hauled her loose in my trailer and we loaded her up without laying a hand on her. When we got to my farm, Dr. Hannah slipped inside the trailer and within about 15 minutes had a halter on her and she led her hesitantly out to join the other 3 horses in my arena at the time. Like the horses from the King County case, all the horses including Sasha were riddled with worms, covered in lice, and had rain rot. Sasha’s rain rot in particular was VERY bad, her entire back from withers to tail was one crusty oozing scab. And of course, she was very, very thin.

She was nervous to handle, and clearly scared by her ordeal, but she allowed us to lice powder her and start treating her rain rot. After a couple of days she managed to get her halter off and her blanket was falling off and we had to catch her again. With a soft voice and moving slowly I was able to get it back on her without too much trouble. She really didn’t act like a horse that didn’t know how to lead, but rather a horse that had been traumatized by all that had happened in the previous couple of months. I put her in a stall for a couple of days so I could easily catch her to treat her rain rot and so she could get handled a bit more. But still, Sasha remained aloof and hung back from people. She would often pin her ears and walk away when people came near her.

Gradually, over time, she realized that people were kind to her, and could provide scratches to her itchy spots and faithfully brought her food several times a day, and we began to see her attitude change.

Now Sasha is a changed horse. Her rather ugly winter coat shed out, along with all her rain rot, to reveal a beautiful steel gray coat that shows signs of starting to dapple. She LOVES people and will follow everyone around looking for attention. She is probably the most social horse on the property right now and everyone that meets her falls in love with her sweet disposition. Gone completely is the aloof, standoffish mare from before. She loves to put her nose in your face for nose kisses. She would still benefit from daily handling (which, with as many horses as we have here, is hard to provide), but she is going to be an absolutely fabulous horse. She is a MASTER of the arab head flip, and does it all the time, sometimes just to amuse herself or to remind the other horses that she is a princess.

We thought Sasha was pregnant for some time because her weight came back quickly. We asked the county to check her for pregnancy (and they wouldn’t) but at this point, I no longer feel she is pregnant. She is in fact in heat again, and spending her days right now standing next to the fence where Slam is and dribbling pee everywhere. She is a bit of a hussy.

Sasha is one of my favorites, and I am very glad to be able to speak freely about her now. She is currently pending adoption.

Here is Sasha when we first got her and me trying to catch her to fix her blanket: 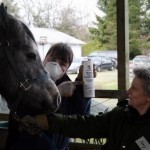 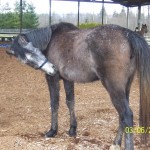 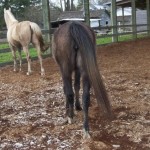 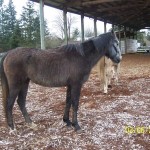 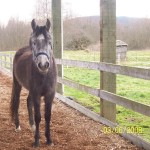 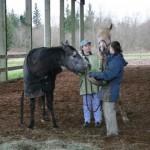 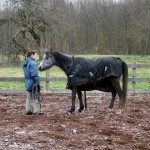 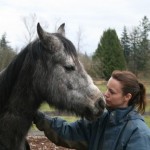 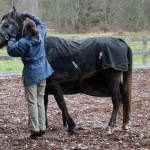