Congratulations to Megan M. from Tacoma, WA on her adoption of Sasha!

I will post photos when I get back but Sasha and her new Mom, Megan seemed to be getting along great when I left the barn. I’ve been bitting my lip for weeks in anticipation of her arival at KCJ where I board so I was there to meet everyone today

Sasha had many of her old and new fans around today! It was obvious that mswan has been a great influence on her. She was a lady even though lots of barn commotion was going on.

Coconut even got to get out on the grass to do a little grazing with her for a few minutes before it decided to POUR rain on us all. I think Sasha held up pretty well with the big ride & appeared nearly unconcerned about the goat that made an appearance while we were all getting aquainted.

I will say that I got a little choked up when I saw the unfmiliar truck that I’m sure belonged to her new family pull up with a sky-high pile of hay … ALL for Sasha!! To think that for most of her life she didn’t even know that’s what people were for, she must believe she’s Sasha, Queen of World! I’m THRILLED to have her as a new Barn Pal for Coconut!

As Jet says, it went well today.
It took 5 minutes to load and most of that was me doing a little last minute training. I asked her to come in and out of the trailer a few times just for pactice.
I had hoped to give Megan a few pointed as to how I’ve been working with Sasha but the skies opened up and that ended that.
Sasha was calm and well behaved.
I will miss her. Sasha is a fun horse to work with. Megan should have a lot of fun with her.
Best of Luck to Sasha and Megan! Any questions just email me or call. I forgot my camera so Thank You Jet for remembering yours and taking a few pictures. It was fun to see you and Coconut. 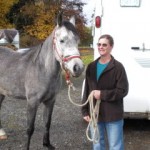 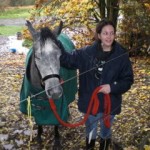