Brittney Stewart of B&D Sport Horses and Training has been working with Shiloh since May, and her progress has been nothing short of remarkable. Here’s an update from Brittney:

Yes, the rumors are true, I am in love with Shiloh! I enjoy working with this brave little mare that on the rare occasion will display a sassy attitude that quickly dissipates with a leg on for forward and a growl to let her know being sassy under saddle isn’t acceptable behavior. I enjoy working with her because it is an honest 2-way conversation and for the majority of the rides, she is willing to work and wants to please. In addition, she is incredibly brave and not spooky, but very curious about exploring the world with her human aboard.

I’ve lost track of the numerous trail rides we’ve gone on, plus she’s crossed numerous bridges, seen a lot of new things, and was great in a group of 3 other horses and is fine being the lead horse through the “scary” parts of a trail, or in the middle or bringing up the rear. There is one memorable incident where 3 experienced horses that have gone on numerous trail rides each individually decided to spook at the bridge with water running underneath it. After the 3 geldings failed, I asked that no one give up and dismount until Shiloh had the chance to lead the way. Shiloh went up to the bridge, snorted, put her head down to sniff for about a minute and then turned her head to look at the 3 scared geldings, let out a sigh, then confidently marched across the bridge. Once across to the other side, she looked at the 3 geldings as if to say, “Ok, it’s safe come on over,” and she then proceeded to march forward on the trail to lead the way for the remaining 1.5 hours left of the trail ride.

At the beginning of September, Shiloh left Bear Creek Farm to stay at home with our 2 retired geldings, Odin and Deeds for the entire month of September. Shiloh was fine being at the bottom of the herd and enjoyed 24-hour pasture turnout. I hacked her along our neighborhood road, about 1/3 of a mile,  to ride in my neighbor’s outdoor arena and she wasn’t worried about the traffic and was her usual sensible self. I then gave her a week off in September to chill and just be a horse, since she worked hard and learned a lot during the summer. The weather was warm, she was able to gallop around the 3 acre pasture to blow-off steam, and I had gotten to know her, so I didn’t even lunge her after her week off and just started riding her again. She was great and willing to go back to work and I schooled her for some jumping sessions in a group ride.

Unfortunately, my geldings had been warning her for a few weeks to not get in their bubble and she didn’t heed their warning and received a large bite that required 3 stitches on her nose. Dr. Hannah Mueller did an incredible job and there won’t be a blemish to mark her lovely head. Dr. Mueller was impressed with how well-behaved Shiloh was when she shaved the wound and injected a local before placing the stitches. I was impressed that Shiloh didn’t need a sedative. I don’t think my geldings would have been that easy to handle and they would have required a sedative to make them very sleepy before a vet could inject a local near the wound. Shiloh then had to have some time off because of the wound, so I slowly started bringing her back to work at the end of the month and as of October 1st, she has been at SAFE Harbor where I am incredibly fortunate to keep riding her until this little gem is discovered and is adopted into her forever home.

It is always interesting to start riding the inexperienced horses through their first winter as the weather gets cold, the wind blows, and strange sounds occur from limbs, leaves, and other debris is blown around. In addition, with the  daylight hours shorter, it means riding with shadows. For the most part, Shiloh is handling it well if I lunge her prior to riding. If I don’t lunge her, she does something she did the first few times I cantered her back in May, which is tuck and squeeze her hindquarters at the canter until she warms out of it, which I call, “The Shiloh Boot, Scoot and Boogey.” Shiloh doesn’t do anything naughty, but it does feel weird and seems like an awful lot of work to squeeze and tuck her hindquarters that much. Lunging for a few minutes prior to riding prevents this or just riding her both directions in the canter also dissipates this tucking behavior. On the days I don’t lunger her, I have been trying to get her warm and supple through her topline at the walk and trot before asking for the canter, but as of yet, that doesn’t seem to prevent the tucking of her hindquarters. Currently, since this was not present the entire summer, I attribute this to her being frisky in the cool weather. Again, if I lunge her first, she doesn’t do this at all. I am pleased to report that her right canter has improved and she’ll pick up the correct lead as long as she is straight in her neck and stepping her right hind into the outside left rein. She also is learning how to lift her tummy to raise her back in the downward transitions.

We’ve only gotten in a few jumping sessions this month, but she has been my easiest, most willing and brave horse to teach how to jump. She does need to gain more strength to find her balance, but that will easily come with time, since she is so willing to please, which of course means being careful to not push her past her physical limitations.

I know Shiloh will be adopted soon, but until then, I’ll continue to ride her 5-6 days a week and work on getting her stronger and more balanced and hope to take her to some schooling shows and weather permitting some more trail rides. 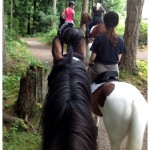 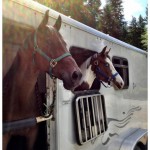 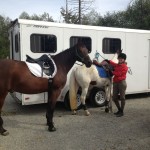 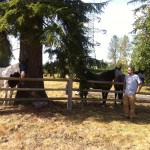 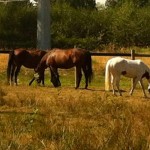