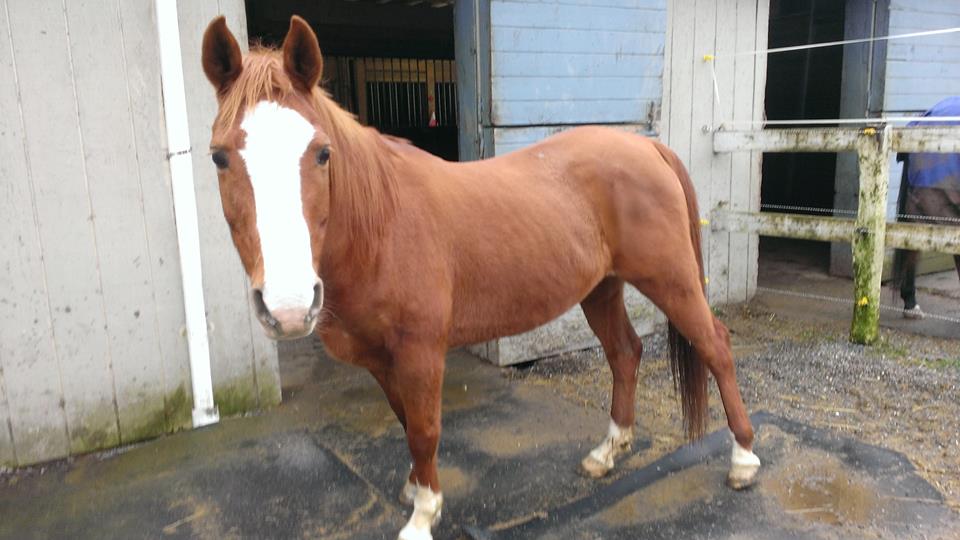 We received this tragic news from Skittles’ adopter Susanne M.

My sweet Skittles left us sometime last night. She does not appear to have colicked or have been distressed; she looked like she just lay down to sleep. I pray she didn’t suffer or know any fear.

Skittles had such a big personality. She greeted everyone who came into the barn and took an interest in everything that went on. Sometimes it seemed as if she was about to join a conversation.

She made her opinions known if her mash took too long to be served, but I like to think she knew she would never be starved again. Despite her inability to chew grass or hay in her last two years or so, she thrived on her mash diet. We discovered that she loved bananas, replacing the apples and carrots she could no longer have. She was always eager to go out to the arena, often galloping around in sheer high spirits before getting to work walking at liberty with me to “barrel race” (walk around some barrels) and “jump” (step over some poles).

This is just so sudden and unexpected. Dr. Colton gave her her annual checkup and shots about three weeks ago and said she looked terrific; she treated him to a display of high jinks in the arena, which prompted him to ask, “How old is she?” Whatever her age may have been, her spirit was joyful.

What Skittles gave to me is immeasurable. I was 65 years old when she became the horse of my own I wanted since early childhood. She taught me so much. I can’t grasp that I will never again see her looking over the fence and greeting me.

I want to thank everyone who helped me take care of Skittles since I adopted her in 2014. I won’t mention names, but they know who they are and how much I appreciate them. And I also want to thank Save a Forgotten Equine, where Skittles was rehabilitated after being rescued from starvation and neglect. Thank you for entrusting her care to me.

Susanne, we are so saddened by Skittles’ passing. Thank you so much for providing her with so many years of love, laughter, and great care.