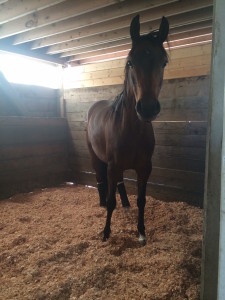 Two weeks ago, Cameo had a training mishap during a ground work session. She was being worked on a long lead rope, and she flipped her tail up and over the rope, clamped her tail down, and pulled the rope out of the hands of the person who was working her. In an effort to get away from the scary rope, she started spinning in circles, and kept spinning for about a minute. She finally unclamped her tail and the scary rope fell to the ground.

Cameo never stumbled and took a bad step during this, and she walked off fine, but a few minutes later, she was three legged lame, holding her left hind up and putting no weight on it whatsoever. There was no swelling or heat, but she was clearly in discomfort. Dr Fleck came out and examined her, but was unable to determine what was wrong. His suspicion was that something was going on in her hip or pelvis, maybe a muscle tear, maybe a fracture. He gave her pain medication and ordered stall rest through the weekend with a recheck on Monday morning. Cameo was an angel for her confinement, and her attitude remained bright, despite the fact that she was literally hopping on her right foot and keeping her left elevated. She remained unchanged through the weekend, and we all were extremely worried about her.

So it was a huge relief when, by the end of the weekend, she finally started putting weight on her bad leg. Dr Fleck was pleased with her progress but instructed us to keep her on stall rest, and continue to monitor her condition. She was rechecked again after a week, and Dr Fleck had us start hand walking her, starting with 5 minutes per day and increasing to 10 and then 15 minutes per day. At 15 minutes, she started showing signs of lameness, so Dr Fleck instructed us to take her back down to 10 minutes of hand walking twice a day.

Special thanks to Tim Matts at Firstfruits Feed, who opened his store on the 4th of July to sell us white pine shavings for Cameo’s stall after she had an allergic reaction to cedar shavings. We are so incredibly grateful for his generosity and kindness at a time when we were very worried about our girl and wanted to keep her as comfortable as possible.