Stella was signed over to SAFE today by Snohomish County Animal Control. She’s a tiny thing, still thin, but otherwise looking much improved from the photos taken of her a few weeks back by SCAC.

Stella was one of two horses seized by SCAC in early May 2014 due to starvation and neglect. She was thin (BCS 1.5/9) with lice and a fungal skin infection. She spent six weeks in the care of SCAC before being signed over to SAFE. Here are photos that were taken about four weeks after she was seized: 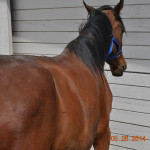 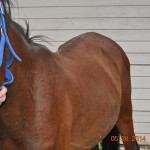 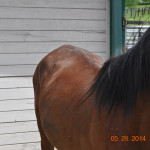 She was signed over to SAFE about two weeks later, once her fungal infection was completely cleared up and the vet gave her the okay to travel. Here are some photos taken on the day she arrived: 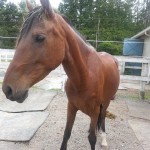 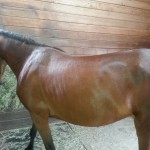 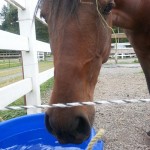 She’s a little unsure about people, and is reluctant to allow her head to be touched, which makes haltering a little bit of a challenge. But with consistent handling, she should come around quickly. She appears to be a very sweet little filly.