Strider has been puzzling us for months with an on-again-off-again urinary tract issue. His only symptom was random bouts of leaking urine. Sometimes he would “dribble” significant amounts of urine, splashing himself and making a mess of his stall. Other times, he would go outside, stretch out and relieve himself with a completely normal urine stream. Each time the unusual urine dribbling was observed, Strider would have no fever, be in good spirits and eating normally.

Our veterinarian recommended a urinalysis to check for the possibility of infection or stones. This proved VERY challenging as Mr. Strider is a gentleman with a healthy dose of modesty. He refused to cooperate when anyone was near him with a collection container.

After some time of trying to catch a urine sample randomly, we found a generous volunteer who was willing to sit in his stall for however many hours it took to convince him to pee in the cup! Patience won out, and a sample was sent to the lab. We had high hopes that the results would provide the answer to this mystery.

Fortunately (or unfortunately, depending how you look at it) the urinalysis came back completely normal, with no indications of either a stone or an infection. While we were relieved, we still did not have an answer.

After multiple volunteers reported they were seeing the dribbling, we began to notice a pattern. It almost always occurred as the volunteers were feeding. Up to this point, Strider’s stall was a fairly constant wet mess. An experiment was conducted to determine if Strider was continually “leaking” urine, or only at feeding time. We moved his slow feeder outside, so eating did not occur in the stall. It quickly became clear that all urine dribbling was now happening outside…and that the bouts of dribbling were directly related to feeding time.

Strider’s stall now remains clean and dry nearly all of the time, which seems to indicate he is not experiencing an incontinence issue. Due to the complete absence of other symptoms along with the negative lab results, we have come to the conclusion that this is a behavioral condition. After sharing the story with a few people, we started hearing about other horses who have a conditioned response and dribble urine at feeding time. So for now, we’re considering this mystery solved and chalking this up to just another unique aspect of Strider’s very special personality.

Here are some photos of Strider taken last week. He’s not a happy camper because his front foot hurts. We’re still treating it as an abscess with soaking and wrapping. At least he is a good boy for that! 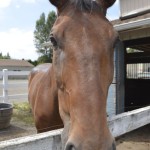 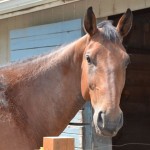 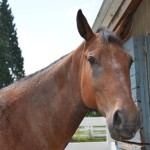 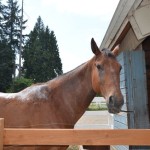 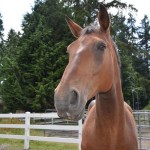