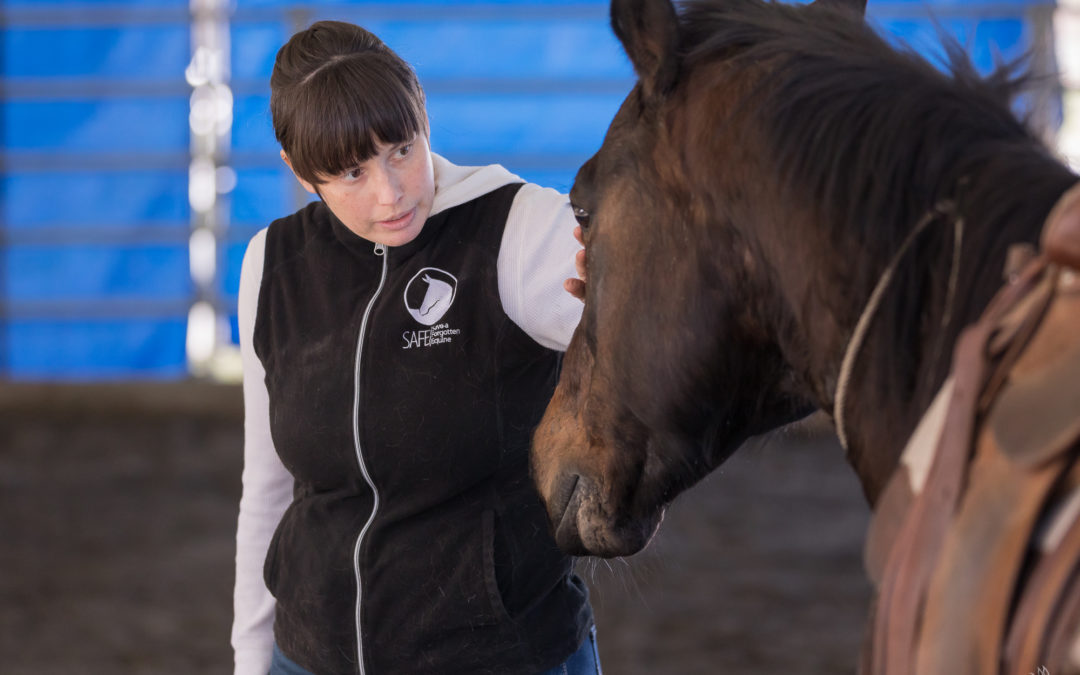 A nice update from volunteer rider Lisa G about Teddi and Roscoe:

Teddi is improving greatly in her groundwork. I slowed down and let go of my timeline expectations for her after the March clinic, and lifting that unconscious pressure has really helped our progress! There were several days that I simply didn’t have time to get into anything too troublesome (and therefore help her out of her trouble spots), so we spent several sessions working on Super Basics: being caught, lowering her head, leading, releasing forward instead of bracing back, and sometimes just getting groomed with extra mane scritches. When I did get back into my scheduling groove and revisit groundwork and the flag, Teddi was much more willing to search for an answer that differed from her “freeze and hope it goes away” and “squirt around sideways as fast as possible!” go-to’s. She is still troubled by the flag but is quick to calm down and move her feet after a couple initial boot-scoots, she is softer and more punctual in giving to lead pressure, and she straight-tied BRILLIANTLY this week! I so love this sweet little mare!!

Roscoe: The first few times I rode Roscoe in the arena a couple weeks after he was re-started in the March clinic, this guy was GA-LUED to the gate. I mean, I would ask him to walk forward on a right track, bend in a one-rein stop, and he would hold a 90° bend to the right while falling sideways to the left, toward the gate. There were a couple of times that I fully expected us to crash and burn… and this was at the WALK! Ride #1 we got a quarter of the arena length away, stood quietly, and called it a day. After that, I basically offered him this choice: “you can face or move toward the gate if you insist, but you’re going to have to WORK… or you can face AWAY from the gate and get a break.” MOVING away from the gate got a break and pets and praise. He caught on quick! He still tends to bow toward the center when we are moving away from the gate, but now I offer him a lively inside leg backed by an outside rein, and if he still blows through my aids (less and less!), we get to WORK!! We are working on soft feel at the stop and walk, and he is getting more and more responsive to my seat, requiring less leg all the time. It’s like once he figured out that first step away from the gate on day one was ALL I WANTED on day one, he’s been more and more willing to try. Roscoe was SO bull-headed at first, I really didn’t think he’d be so willing to change so fast after however-many-years of having to push through everyone and everything to protect himself. I am SO IMPRESSED by this big guy’s heart! 😊❤