The latest on Ruger 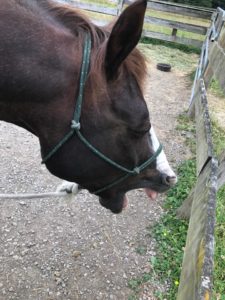 SAFE volunteers have been working hard to get Ruger through his rehabilitation. His weight has been holding steady for a while now and he seems to be doing well on a maintenance feeding of ten pounds of senior feed per day, broken into three meals. He is out on pasture for half the day and grazes a bit, but due to the condition of his teeth, he does not get (nor will he ever get) the amount of the calories he needs to maintain a healthy weight from pasture or dry hay alone. He gets some hay in his stall at night that he picks through but again, it’s the senior feed that is giving him the nutrients he needs. Ruger will need to be on that for the rest of his life.

His hooves have made a significant amount of improvement. With the help of some prescription medication, we have gotten the hoof fungus under control. Once that was cleared up, we could tell that he was genuinely uncomfortable on his front hooves. Barefoot, he looked like he was walking on broken glass. For turnout he wore a pair of Soft Ride boots with gel insoles, designed for horses suffering from extreme lamanitic pain. At night he would come into his stall we would take off his boots and treat the fungus. This went on for about a month. When the fungus cleared up we decided to give him shoes with pads and dental impression material under the pads. This made him as comfortable as with the boots on but we could now start to assess him as a riding horse.

Ruger’s a gentle guy to be around, be he has some issues that need to be disclosed. He is easy to walk from his stall to turnout but he needs to be watched around mares. We have put only geldings in the pasture next to him because he will become too attached and excited if there is a mare close by. He has shown no signs of aggression towards people.

After doing some groundwork to get his muscles and joints moving and strengthening again, we tacked him up with the saddle. The first two times we did this he reared straight up into the air. The behavior did not continue with subsequent saddlings, but he remained very tight backed and visibly uncomfortable.

So to recap: after 2 months of rehabilitation with SAFE, Ruger is back to a good weight, all rain rot and hoof fungus has been treated and healed, and a comfortable shoeing package is helping him walk and trot without front hoof pain. This is a huge transformation from where he was just a few months ago. However, it’s not enough for Ruger to be adopted as a riding horse. With every step and movement he makes, you can hear his joints creak and pop. While he comfortably walks on his front hooves, his hinds show advanced arthritis, He is clearly not sound at the trot. When asked to lope he does so out of respect for the handler but he can’t keep it up for very long. So we have decided not to ask him to be a riding horse anymore.

So what does this mean for his future? What will be the ideal home for this boy? We are now accepting applications from local families that are willing to retire him and give him the happy life he deserves. He is not available as a riding horse so we are looking for someone who wants a handsome horses as a pet and companion. Due to his tendency to show some stud behavior, we have not turned him out with other horses. So ideally he will be able to be kept separate from the other horses at his new home, at least until his studly behavior ceases. Generally it can take up to a year for the stallion hormones to subside but with some late cut stallions it never completely goes away. While he has show no signs of aggression towards people, we would still recommend children remain supervised around him, and care being taken when around mares

He is healthy and ready for a new home. He has been a delight to be around and SAFE is hopeful the right home will be found to love and protect this gentleman the rest of his life. 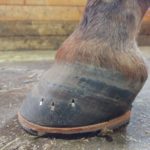 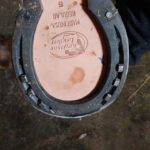 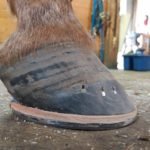