Ian took Mason into our last clinic with Joel Conner. Here is what he had to say about the experience:

Mason and I have slowly been building trust together since he first appeared at SAFE with both sides “mysteriously” scarred and deep fear that would surface if I held a rake or broom near his right side. Lori has done an amazing job slowly coaxing out more and more trust from him, and I am so grateful to her for letting me play with this amazing horse. The clinic environment was a little challenging for Mason at first, but he was relatively quiet for most of the morning. His spookiness subsided as I worked the flag over both sides, but it remained consistently present with each fresh approach. He began to loosen up a little more when flexing to the halter, but he had a really hard time circling me at a pace slower than a trot. Joel took some time with him to work the flag over him more, with a more intense feel. This, predictably, drove Mason crazy at first, but with each new attempt he grew quieter and quieter. When I took over, his reactions would still surface, but to a much lesser extent, and I got to be more and more assertive with the flag around him. Despite all the tension and fear he carries, Mason was able to bring his energy down after every session and meet the next attempt with fresh try. He is such a sweet horse, and he learns everything so quickly. I know it’s just a matter of time and consistency for his nerves to settle.

In the second day of the clinic, Mason was even more calm than when he started the first day. He had only one major freakout, and that was about being approached by the flag when passing between me and another object – in this case, the arena wall. With Joel’s help, after some more repetition in that space, Mason calmed down to the point that he would move through that gap at a walk, with the flag either approaching his rear, resting on his back, or tickling his cinch area. After all our desensitizing, he finally gave me a gentle walk, and was unperturbed by anything the flag would do around him. Finally, at the end of the second day, when we were sharing parting thoughts with Joel, Mason gave me a giant, long-necked yawn – the only one of the whole clinic weekend. Leading him back to his pasture, he felt like a different horse. He was so much more relaxed after that work, I can’t wait to see how he does as his work continues. 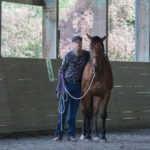 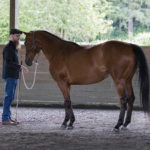 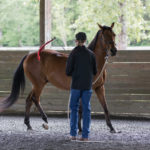 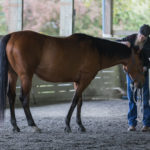 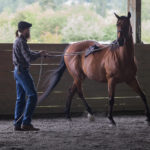 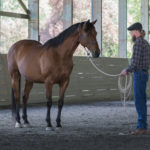 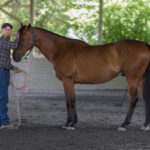 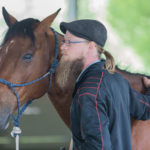