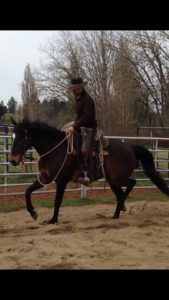 Kai is going very nicely for trainer Joel Conner in Vancouver WA. He’s made some great improvements, both in the ground work and riding over the course of his tune up training. There was a little setback a few weeks back when Kai cut his chin while playing over the fence. He is a playful boy who loves to play bite face with his neighbors. Joel moved him to a different stall so he would not have the temptation to get any more injuries but lost some training time while his injury was healing. After his recovery, Joel got back to work with him. He’s been very pleased with his progress since then. We have some very promising adoption applications for Kai, and he’s being shown this week to a few of them. If he is not adopted before the end of the month, we’ll be bringing him back to Safe Harbor to continue working with our volunteer riders.