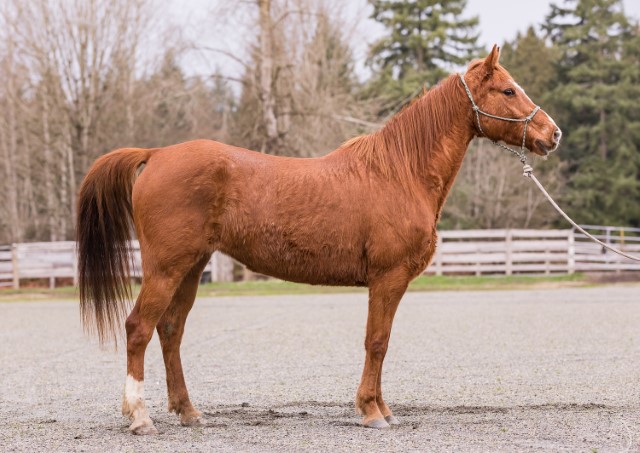 Teddi had a visit from the vet last week. She turned up lame on her left front leg, and we noticed a suspicious bony lump on her pastern that has been getting larger over the past few weeks. After a brief lameness exam, Dr. Fleck took some radiographs, and the diagnosis was very clear: Teddi has osteoarthritis in her left front pastern joint, commonly known as ringbone. Hers is a relatively advanced case. Since she is such a young horse, it’s likely that the arthritis initially started from some sort of trauma to the joint, such as a fall in the pasture.

Unfortunately, ringbone is a degenerative condition that has no cure. In advanced cases like Teddi’s there are surgical options to fuse the joint–if you can fuse it and eliminate the motion, you eliminate or decrease the pain. Another ringbone management option that was presented to us is an injection of a polymer hydrogel into the joint space to provide cushion. Since Teddi’s case is pretty advanced, however, it’s not clear how well injections would alleviate her lameness.

Before she turned up lame, Teddi was getting underway with groundwork training in preparation for starting her under saddle. She is a sensitive young lady who needs a quiet, patient hand. There are several other horses at SAFE who are farther along in their training and looking like good riding prospects, so we aren’t rushing any decisions on her treatment right now. Dr. Fleck said that she is pasture sound for now so we don’t need to worry about pain management at this point, as long as she isn’t being worked. There is the potential that we might be able to get help from a veterinary surgeon from Washington State University who is studying a surgical procedure that would fuse her pastern without having to put her under general anesthesia. This would be the best case scenario for Teddi. We’ll know more in the coming weeks.

In the meantime, our pretty redhead is living the good life in the spring sunshine. She’s enjoying getting out on the grass now that our pastures are open for the season, and she and her new turnout buddy Nashville are having fun getting to know each other.