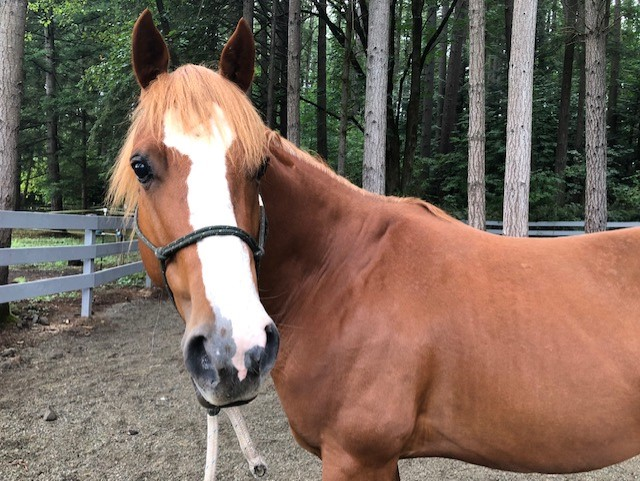 This sweet guy can’t seem to catch a break. A recent lameness has Valor sidelined once again, and we are waiting on more diagnostics to tell us what’s wrong this time. He became very sore in his back during ridden work at the end of June. Dr. Meyer of Pilchuck Vet Hospital did a chiropractic adjustment on him and found that much of his spine and both sacroiliac joints were out of alignment. All the strength-building exercises we had be doing were for naught, because prior to the adjustment, Valor wasn’t carrying himself properly and using the muscles that he should have been. We were hopeful that chiro work would help get him back on track, but we continued to see lameness issues in him.

Dr. Renner of Rainland Farm Equine Clinic performed a lameness exam on him a few weeks after his adjustment. He found flexion tests to be pretty unremarkable, but Valor continued to still be very sore in his back and SI areas. We opted to try the conservative medical management route with pain medication, muscle relaxers, and time off. But Valor was still painful after this treatment, so a bone scan was recommended to get to the bottom of his issues. Since the conservative method was unsuccessful and since Valor is such a young, promising horse, we have opted to have the bone scan done.

We are now waiting for an opening in the schedule at the clinic. Hopefully this procedure will give us some concrete answers on what’s truly ailing him and we can develop a clearer rehab plan with it.