Sandi N is a volunteer at SAFE Harbor who has been spending some quality time with Savannah, both as a friend and companion, but also helping her with her fibrotic myopathy. Terry asked Sandi to share her thoughts about her interactions with this lovely mare:

Meeting Savannah for the first time I was initially struck by her beauty. Her Tobiano coloring and the lacing that edge her geometric shapes are stunning. The next thing I noticed was her funny walk; stiff-legged, she slaps the ground with her back feet. During my first visit I was able to see her move at liberty in the arena with another one of the SAFE horses. They were enjoying the freedom and urging each other on; both leaping and bucking. Savannah seemed to be saying “I may have some challenges in life but don’t count me out!” 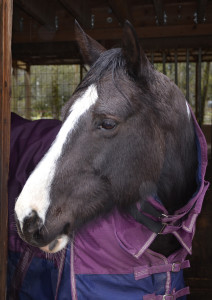 I’ve gotten to know a lot more about this spunky girl. She’s smart and she is very intuitive about her surroundings and those with which she interacts: both four-legged and two. I spend a few hours each week addressing the restrictions in her hamstrings and easing the aches and pains that result from her body’s need to compensate for her condition. She is a wonderful subject and is often very active in her message sessions; leaning into me or dropping a hip to let me know I found a good spot. She is also very trusting and a hard worker during exercise.

At the same time, she can be strong willed. Savannah is very food motivated which is understandable since she has gone without in the past. I always try to minimize conflict around feeding time, but things do not always go as planned. Savannah does acknowledge a strong voice and once she realizes there is determination behind the instruction she is very cooperative. For example, she often resists having her hooves cleaned and it may just be uncomfortable to have her legs manipulated so she’ll pull away. However, as soon as she realizes my resolve she complies beautifully, standing perfectly square and shifting weight from each hoof just before I reached for them. I have to give her extra points for accomplishing this as hay was being placed in her stall when I was running late the other night. Typically, she feels she needs to be in her stall watching vigilantly for those first scraps to fall from the hay loft.

Savannah seems to have a fondness for young people and a kindness for people new to horses; maybe she senses their lack of agenda or nervousness. I brought a friend with me to the barn who is afraid of large animals. Savannah was an angel, curious and very sweet, and she won my friend over completely. She even followed her instructions as we walked along the rail in the arena.

She is a solid horse; a survivor for sure.