I had a very exhausting day (more on that later), but I wanted to give a quick update for the Whisper fan club. Whisper was down 3 or 4 times last night (I am beginning to lose count). After much discussion, the decision was made for Whisper to go to Pilchuck today. She is now safely in their ICU unit, in a huge heated stall where she doesn’t even need to wear a blanket. While she was there, she laid down for us, and then we were able to watch as they hoisted her up with our loaned firehose sling and their hoist system. It was the most seamless, low-drama lift ever — no one even had to touch Whisper and she glided up to where her feet were on the ground and then she just stood and bore her own weight. That alone almost made me cry with relief. I know Lisa and her husband Jim were exhausted as even when they were not getting up at night they were woke up each time the noisy electric hoist was used and could not get much sleep. And now Dr. Hannah gets to go visit her family for a few days, and we all get a break. They will be running some tests on her to try and figure out what is going on with her heartrate — cardiac myopathy is certainly a possibility that is being looked into.

I’ll post some photos tomorrow of her at Pilchuck, but she’s doing well. I am feeling hopeful again that she will make it.

Whisper shortly after arriving at Pilchuck and deciding the soft bedding was just too inviting, she needed to have a rest, while Dr. Mullott and Dr. Hannah work on putting her new head bumper that she gets to wear so she doesn’t hit her head when she is down and struggling.  Once the hoist was installed, up she went! 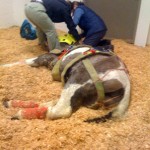 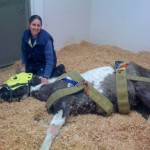 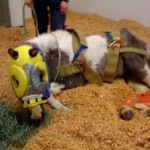 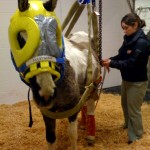 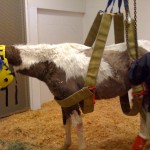 I stopped at Pilchick on my way home from Jaime’s last night to drop off Whisper’s Red Cell and supplements and she was standing in her stall, still attached to the sling, but was eating and very alert. The vet tech in charge reported that Whisper had not indicated that she wanted to lie down, had drank some water, was cruising around her huge stall checking out all the corners and had passed firm poopies. I popped into her stall to give her some scritches and have a lil chat.

This filly clearly has a strong spirit and is not done with the world yet!

Just got an update from Pilchuck. Whisper is doing very well this morning. She was up all night, and although she was attached to the hoist she did not try to lie down during the night and stayed up and ate most of the night. This morning they unattached her and she lay down to rest — they will probably continue to give her the choice during the day and then keep her up overnight when they are not as staffed. She is not showing any colicky symptoms and her manure is still cowpie-like but she did not feel it was a major concern.

Her bloodwork came back for the most part normal. Her anemia is improving and she feels is associated with her current state and not a chronic problem. She got a Vit E/Selenium shot yesterday and they also ran tests on her levels which we should get back today. We are still waiting for the cardiac troponin (sp? I am sure I butchered that one) test which tests for a particular muscle enzyme which should only be present if there is muscle damage in the heart (cardiac myopathy). They are also going to take a Coggins on her today, as a precautionary measure.

All in all a pretty positive update.

Additional thanks goes out to the following people who made donations for Whisper:

I also want to call out a very special thank you to Tami Jennings, the owner of Cascade Meadows, a large boarding and training facility here in Monroe. She collected donations at her barn and brought me out 8 bales of hay during the worst weather when I was almost out of hay and had no truck. She also brought bags of senior and several jugs of oil and cheerfully took me to town to buy extra supplies when I had no way to get to the feed store. She is the one that put us in touch with Joni Sorita, another very kind person who is helping us with Whisper and is an equine massage therapist that is going to do some work on some of our horses as well. Joni is also the person who knows Olivia Newton-John, whose husband’s company donated the special herbal formula for Whisper.

My thanks to all of you that have offered monetary support, time or feed donations, or simply sent us a note of encouragement or are supporting us by reading this thread. I hope that I am not leaving anyone out, but it is quite possible with the craziest of the last few weeks that I have, so if so please accept my sincere apologies, your donations are no less valuable and appreciated.

CSO Davis and I ran out at noon to visit Whisper. She was laying flat out in her stall, but looked very comfortable. We started talking to her, and she rolled into the sternal position and attempted to get up

She made a huge effort, but wasn’t able to stand, and laid out on her side again. She’d only been down for an hour, so probably wasn’t quite ready to get up (although she thought she was.) The attending Vet and techs, hooked the pulley to her harness, but it appeared that Whisper was content to just rest (again in the sternal postion).

I must have just missed CSO Davis and Msclarkee at lunch. I was out at 1pm to visit Whisper and she was up and patiently allowing the techs to adjust her harness to fit, it seems our little one has taken to wiggling out of the harness. Now she is securely in place and continues to be very interested in her food and water. I havent seen Whisper since I went on leave to get some rest as of last Friday so I think she was a little surprised to see me, she lifted her head and went “wait a minute I know you!” I was sure to tell her how loved she was (pretty sure she has caught on to that by now) and that everyone is supporting her recovery efforts. She is a very lucky girl, who personally offers me inspiration everytime I look at her!