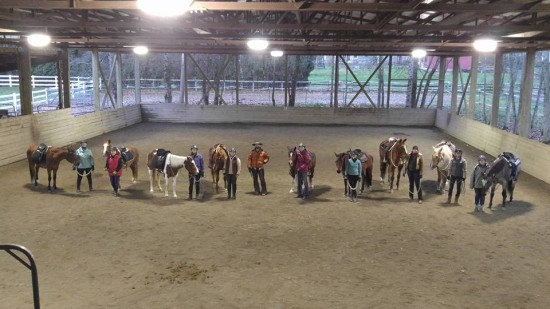 We had a great time hosting Joel again at Safe Harbor. The horses and volunteers had an amazing weekend and everyone progressed in their feel and training. Here are a few accounts from the volunteer participants about what they learned about the horses they were working with during the clinic:

Jolene D:Khianna- At the time of the clinic Khianna had a total of 4 or 5 rides on her since her return from foster. She was nervous, but did so well! She tries so hard. She is coming along nicely and I believe will develop into an incredible partner for someone.

Sara E: Jewel — Jewel was an all-star for the clinic, Claire has done such a great job with her. She felt flawless going from hind-end to front-end turns. I learned so much while riding her during the clinic. She is going to make someone a really great horse.

Sara E: Khianna — Did ground work with Khianna and at the beginning she was a nervous trotting mess, but Joel came over and helped me get her front feet moving and she calmed right down. She is so loving and tries so hard. Once she figures out you aren’t going to eat her, she just wants to please you and be loved on, I don’t know if I have ever worked with a horse that tries to give you 150% all the time.

Lisa G: Ben- I can’t say enough about how the horsemanship that Joel has helped bring to SAFE amazes me. I had Ben in all 4 sessions, GW and riding, and I was honestly just hoping I could get him to stay focused on me with all of the excitement, maybe get some nice serpentines down in the riding portion, and work on soft feel and stopping/moving forward off of the seat. Well.…. He did all of those things and SO MUCH MORE. Every exercise that Joel moved the participants through, beginning to advanced, Ben tried. And SUCCEEDED, at least on some level. I am so impressed with the effort this big guy puts into everything; as long as he understands that there are no consequences if he doesn’t understand, and he knows that I will wait for him to figure it out, I believe this horse would be willing to try anything under the sun. In the few days since the clinic, Ben had maintained a quiet, willing attitude, with TONS of deep, relaxed sighs, even during the riding work. SO proud of the progress he has made and so grateful that this work was brought to the SAFE horses.

Sara S: Khianna- I worked with Khianna for the first time doing GW on Saturday morning, and was so impressed by her “try”. She does get a little nervous about the rope and flag coming at her while moving (though not at all while standing still in the comfort of the “herd” (me)). I particularly enjoyed the backing exercises, and she was so in tune with my feet and body language it felt like we were dancing partners! She is such a sweet girl.

‪Sara S: Phoenix- I did GW and rode Phoenix on Saturday afternoon. He hadn’t been ridden in weeks, and it was raining on the tin roof, so he was extra “special” to start, but after just a bit of GW he calmed down and started paying attention to me. Riding, he was great. He’s getting very good at backing circles, front and hind yields (he’s so bendy!). Over the few months I’ve been working with Phoenix, I’ve noticed he tries very hard to anticipate what I want (if he’s in the mood), but as soon as I push too hard and/or he doesn’t understand what I’m asking, he shuts down. On Saturday, I didn’t feel him shut down at all which is probably a combination of both of us getting better at this!

And many thanks again to Joel and Terry for putting on such an inspiring clinic!!! I wish I could come out to SAFE every day, but I’m glad to be even a small part of this great community and cherish this opportunity!

‪Claire C: Mesquite- It was my first official time working with Mesquite, and I think we made some really good changes. He is super sensitive so it was interesting to experiment with him and see how much pressure he needed. I only did the groundwork session with him and it was fun learning to time up with his feet better.

Claire C: Phoenix- For the afternoon session, I rode Phoenix, who I have not done a whole lot with either. He was also good; we worked a lot on more forward motion and keeping him focused on what I was asking. We did lots of bending and yielding, which was so good for him. Overall, he did very well.

Casey A: Stella- I worked with Stella, who is turning out to be a great little horse. We worked on slowing down and developing balance on both the ground and under saddle. We were both so much lighter by the end of Sunday, and I know we got a big change in our partnership. She was so relaxed through the entire clinic, even when horses around her were nervous. She’s also pretty resilient and forgiving of my mistakes. She has taught me so much, and she is going to make someone really lucky!

Erika S: Maggie- I worked with Maggie for all 4 sessions, and she did fantastic! She’s such a smart, willing mare, and we connected early on. One idea that I heard this weekend was that eventually it will feel like your horse is reading your mind… Well, I’m here to tell you that that’s the truth! Maggie remained tuned in for everything we learned about, and worked in sync with me. It honestly helped me more than I think it helped her!

Ann A: Bridgit- Bridgit is a friendly girl and likes getting attention. She is a bit on the lazy side and I had some trouble getting the life up in her while doing circling exercises. She just wanted to come into the center and hang out with me. She made good progress under saddle in the afternoon sessions. She was learning how to pick up a soft feel at the walk by the end of the first day and we had some nice walk/trot transitions. She needs more work backing straight and in a circle both on the ground and under saddle. She also needs more work reaching with her front foot and disengaging her hindquarters under saddle. She felt much more balanced to me than she did when I rode her last summer.

Jane M: Oscar- As a relative novice to practicing Joel’s horsemanship skills, the greatest lesson I took away from GW and riding Oscar during this most recent Joel clinic is the impact GW has on riding. Yielding hindquarters, circling to achieve bend and balance, it all makes such a difference when aboard the horse. I’m able to apply lessons learned under Joel’s guidance to my regular riding lessons. It’s quite remarkable to me, and I look forward to Joel’s next visit and my next “aha” takeaway! 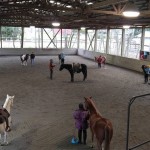 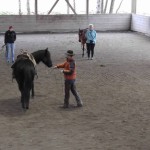 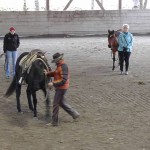 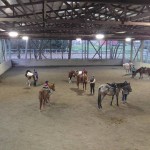 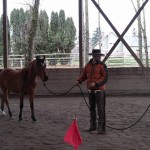 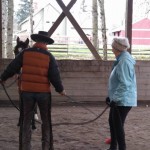 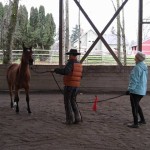 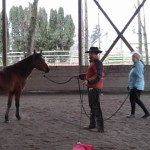 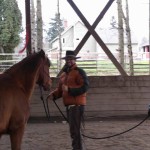 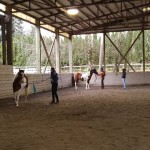 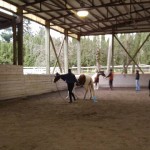 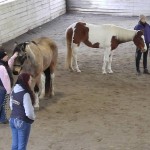 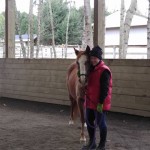 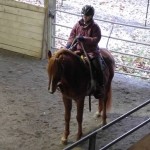 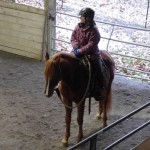 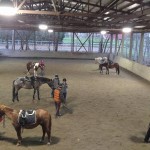 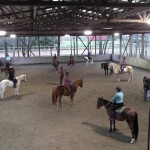 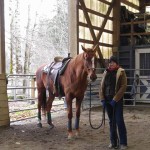 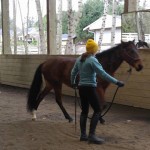 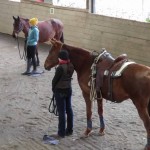 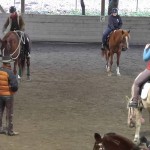 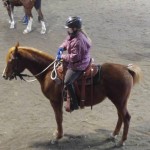 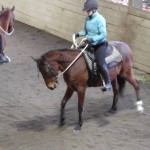