A change of plans for Chip

Chip returned from foster care to Safe Harbor about a month ago and we had high hopes about getting him started in our training program. But with the chance to observe him in motion, we’ve seen some signs that a career as a riding horse might not be the best thing for this horse.

Chip has some conformational flaws in his hind end that effect his strength, stability, and flexibility. Specifically, when he puts weight onto his left hind leg, the leg itself twists a tiny bit, and if you watch really closely, you can actually see his leg muscles quiver as he struggles to stabilize it. Chip turned 20 at the end of June this year, and he’s also showing signs of stiffness in his low back and hocks, possibly caused by arthritis. Because of the weakness in his hind end, we don’t feel it would be fair to ask him to carry the weight of a rider on his back, even a small one. So we have decided to seek out a companion home for Chip in which he won’t be ridden.

Fortunately, Chip has many great qualities that will make him an excellent pasture ornament! For one thing, he’s a stunning looking creature who is lovely to look at. He’s also a real gentleman who is fairly easy to handle on the ground…apart from the occasional burst of excitement that flows from the Arabian side of his pedigree. He gets on well with other horses, geldings and mares, although he definitely has a soft spot for the ladies. But as we’ve said, Chip is a gentleman, and his affection for the ladies is kind-hearted, compassionate, and, well, gentlemanly! The girls at Safe Harbor find him pretty irresistible and he gets a lot of attention, so he probably wouldn’t do best with a mare who is overly amorous… But he exists peacefully with the more level headed gals.

Despite Chip’s physical challenges, he is currently pasture sound, comfortable, and happy, and if he’s not asked too much, he should remain that way for quite some time. If you’re looking for a great companion horse, take a look at Chip! He was badly neglected in his previous life, but he’s come through that ordeal and turned into a nice little horse. He certainly deserves the best of care for the rest of his life to make up for that. 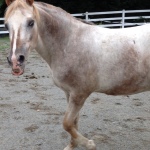 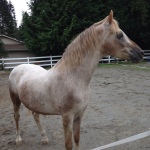 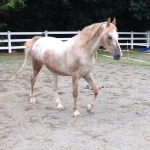 “AS THE STABLE TURNS” UPDATE FROM TERRY:
“Ok, so I have to tell on Lover Boy…He is currently dating two pretty ladies–Miss Emmy and Ms Karma–at the SAME time! It is pretty hilarious to watch him trying desperately to keep up with two younger mares. Emmy plays the cool, easy-to-love sweetheart while Karma really makes him work for her affection, finally giving in this week to his unending love. He sees Emmy at night–they are stabled next to each other–and Karma during the days in their adjacent turnouts. Karma and Chip were found nose to nose this entire week. I hate to break the news to Kai, who I think is completely unaware that Karma has a new boyfriend. As you can see it is a very tangled web of fall love at Safe Harbor. Very entertaining for us and better than the daily soaps. HA!”