Karma had permission to leave the hospital a few weeks ago, but we had no room for her at Safe Harbor, all the stalls were full! We finally were able to move Oscar into foster with our dear friend Helga Roberts at Dutch Mills Farm, so that meant that Karma could finally join us in Woodinville.

The next hurdle to getting Karma home was getting her into a trailer! She was difficult to load when we picked her up from PCAC, but with some patient ground work, Terry was able to accomplish the task in just about half an hour. But it was a much healthier and stronger Karma who was coming home from the hospital, and she proved to be quite the challenge to load. Fortunately it did happen…eventually… and Karma was able to be moved. She’ll be getting a full education now that she’s in Terry’s hands, and before long she’ll be loading in and out like a pro.

Terry got started right away with liberty work for Karma, and she’s doing really well with it. Two days after her arrival, she joined Terry in the arena to demonstrate what she’d learned for a group of local business owners who were on hand for an after-work event at Safe Harbor. Terry reports that Karma is quickly finding comfort in their relationship and that she knickers at her when she comes into her stall. She is still unsure but they are working on a lot of trust rebuilding. Once she knows that Terry is safe and won’t put her in danger, she’s going to be easy to get through training. She has a kind eye and is very happy when she is being loved on.

Karma prefers being outside so we make it easy on her and give her breakfast in bed! 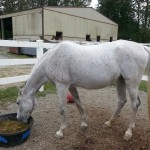 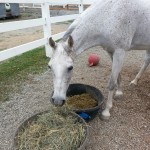 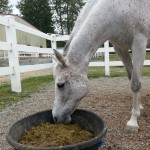