A happy ending for April 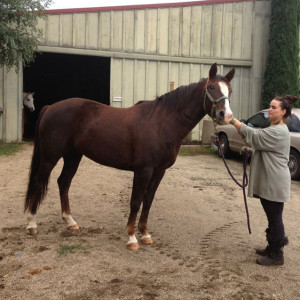 We’re not going to beat around the bush because we have some great news to share: April has been adopted. On Saturday, she left SAFE Harbor Stables with a professional hauler to travel to Equamore Horse Sanctuary in Ashland, Oregon, where she will have permanent home for life. She arrived safely and is already settling into her new home. We’d like to take a moment to share the full story of how this came about with the SAFE community.

This summer, we created our Hospice program to provide SAFE horses whose physical or mental conditions were deteriorating a special space to enjoy a final period of life as comfortable as possible without any external pressures. One of the other goals of this program is to mentally prepare ourselves in advance so that when the right time comes, we do not wait too long to say goodbye. Our first and foremost obligation is to the physical and mental welfare of our horses.

In the case of Logan, the hospice program worked exactly as intended. Following his surgery at Pilchuck for a rectal polyp, Logan’s health temporarily stabilized and then started to decline again. Despite our best efforts, it became clear that his quality of life was deteriorating. A very special foster caretaker took him in, knowing that the goal was to give him an opportunity to fully be a horse and then to let him go. While he was initially nervous at being out to pasture for possibly the first time in his life, he settled in and was able to enjoy a summer truly living the life of a horse. When his health did suddenly and rapidly take a turn for the worse, we were able to act without any delay to say goodbye and quickly end his discomfort. While it was heartbreaking, as always, having a clear intention in advance maximized the joy Logan experienced in the last few months of his life and minimized his pain at the end.

When we have to say goodbye to a SAFE horse, this is how we want it to happen. But when we tried to implement the same procedure for April, we found it was a far more complicated situation. When we put April into the Hospice program, it was with many tears but with a good conscience. Even after being on pasture for a few weeks — a pasture she had been quite happy in before — it was clear to us that things were simply not right with her. She was dragging her toes, lunging at both humans and other horses, and demonstrating a clear unhappiness of body and mind. But given her youth and the emotional difficulty of letting her go, we made a decision that, at the end of the summer, we would have a veterinarian independently re-evaluate her quality of life to basically make sure we were still making the right decision. As it happens, April had a surprise in store for us.

A few weeks ago, we began hearing reports that April was starting to move much better and play more in her pasture. She was also more comfortable holding her feet for the farrier. So we went out as a group to visit her, and discovered that her attitude had clearly shifted for the better! She was pleasant to handle and was no longer showing aggression toward the horses in the pasture on either side of her. At the trot, she was still mildly lame on her right hind and didn’t look entirely comfortable in her back, but she was pasture-sound and happy to be moving around her field. This was a very different horse from the April we’d seen at the beginning of the summer! Whether it was the ability to move freely throughout the day or the hills she was walking up and down, she appeared to have become stronger and more comfortable. We happily voted to remove April from the Hospice program.

We still had to figure out then what was next for April. Her foster situation would not be able to be extended past the summer, and we didn’t want to bring her back to SHS only to reduce her turnout and have her condition go backwards. In an incredibly fortuitous turn of events, we were contacted by a woman named Angie, who turned out to be an angel sent for April. Angie was extremely moved by April’s story and asked us if we had considered sending her to an equine sanctuary like Equamore. As we began to discuss April with the folks at Equamore, they were equally touched by her story and felt that they might be able to help her. They assured us that they had seen many horses like April in the past, and had never met a horse who could not get along with other horses, given the time and the space to work out new relationships.

This was an intriguing spark of hope for us, but we were unfamiliar with Equamore, and given its significant distance from SAFE, were worried about sending April so far away from home. But thanks to some frequent flier miles, our executive director and two board members were able to fly to Ashland for the day at minimal expense to SAFE. We were given a full tour of the property by Equamore’s Vice President, Ruth Kennedy and met with Executive Director, Linda Davis. We discovered that Equamore is professionally run, with multiple full-time staff members living on site. The horses are well-cared for and have a clear daily routine. There are a variety of turnout situations available, and they take great pride in finding the right situation for each horse. The more arid climate of southern Oregon will allow April to be turned out on pasture without the constant concerns about her weight and metabolism. Most importantly, Equamore is a true sanctuary and, as such, is specially situated to meet the needs of horses like April. After spending the day with Equamore, we realized that we had found the answer to our prayers for April and made the decision to officially adopt her to Equamore Horse Sanctuary.

Click here for a photo gallery of images taken during our visit to Equamore Horse Sanctuary.

To be clear, had April still been unhappy in her life, we would have humanely euthanized her this fall, even with the offer from Equamore to adopt her. Our first obligation is to the welfare of our horses, and we cannot in good conscience send a horse in significant pain to someone else to avoid having to make difficult and unpopular decisions. SAFE will never euthanize to create space nor will we ever put a horse into the hospice program in the hopes that someone will rush to adopt her. If we have placed a horse in the hospice program, it is because we believe it is our ethical obligation to the horse.

We view this as a partnership between two equine rescue organizations with very different missions. Equamore’s philosophy is that the life of a rescue horse is a process, and they are happy to be the next step in April’s rehabilitation. We are extremely grateful that Equamore is able to provide a place for April to live as fully as possible and we hope this is the beginning of a long-term collaboration between our organizations. A special thank you to Angie who made the connection between SAFE and Equamore and for paying for professional transport for April to Oregon. You appeared in April’s life at precisely the right moment and we are grateful.

April, you have touched many lives at SAFE and will surely touch many more at Equamore. You have an entire community of people across two states pulling for you and want to see you happy. May you have a lifetime filled with friends, both horse and human!