A visit with Strider and Chip!

I had the pleasure of visiting Strider and Chip at their foster home yesterday. Both boys are looking fabulous and enjoying the onset of sunny weather now that spring is here. Their foster mom, Heather, says that the two of them are best buds, and will stand as close to one another as they can, considering they’re in separate stalls. She can’t really turn them out together, because Strider, who really seems blissfully unaware that he’s gigantic, tends to play a little too rough. But just as good fences make good neighbors, the two of them are close pals.

Strider is a giant, goofy ham who loves attention. He’ll join right in on any conversation that occurs in his presence, as you can see in this video:

Strider’s hind fetlocks are wrapped, because he had to have some proud flesh removed. Strider tends to develop odd little sores on the front of his fetlocks, which don’t always heal that quickly. It’s a bit of a mystery, because Heather says she never sees him lay down, he just rolls. Whatever the reason, Strider is on paddock rest for the next few days while his legs are being treated, so he has a lot of excess energy. Heather says that Strider is amazingly good about letting her wrap and unwrap his legs. This is probably due to all the work that Brittney did last summer with the big guy, when she had an entire daily routine of scrubbing and hosing and wrapping she did with his legs. But Strider is also a sensible horse who understands and appreciates how much everyone tries to make and keep him comfortable.

Heather has been treating his back with mineral oil to keep his skin moist, and I was quite surprised to see how much more hair growth he has now that the last time I saw him. A lot of it is still just peach fuzz, but hair is hair!

Chip is also an amazingly social little guy — once we coaxed him out of his stall, he stood with us while we chatted with a bright and interested look on his face. He loves being petted and touched, and really seems to enjoy the company of people. He’s as handsome as ever. Heather says that Chip is her husband’s favorite and that he sneaks out to the barn to hang out with him!

Here are some photos from the visit: 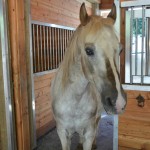 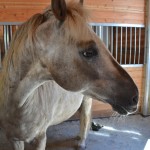 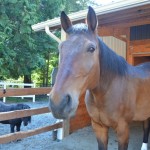 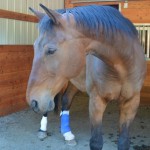 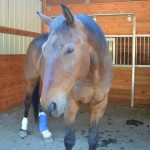 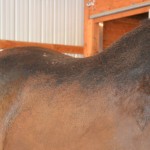