It’s been a while since we’ve provided an update on Cameo’s progress in training, but it’s not because things haven’t been going well…quite the opposite in fact. Things with Cameo have been going SO well that we can hardly believe it.

When we dropped Cameo off at Half Trak Farm to begin her work with Andrea, we saw a major regression in her behavior. She had made a lot of progress working with Brittney at SAFE since her rescue, but she initially regarded her new friends at Half Trak with suspicion, aggression, and reluctance to cooperate. Andrea decided the best way to overcome this behavior was to make herself Cameo’s whole world for a period of time, so for about a week, she was the only human that Cameo interacted with. Happily, Cameo accepted Andrea’s friendship surprisingly quickly, and before long, she accepted the fact that although she was in a new place, it was a safe place, a good place. Once Andrea gained her trust, she was able to proceed with ground work and under saddle lessons.

Things between Andrea and Cameo could not be better. Andrea can call her in from the field, and Cameo comes running at a dead gallop and shoves her head in the halter. Cameo has also learned to bond with other horses…she’s especially close with Half Trak’s weanling filly, and apparently the two are super adorable together.

Andrea absolutely loves Cameo and thinks she is going to turn out to be a nice, nice horse for someone. But she stresses that the person who adopts her has got to be willing to take the time to bond with her. Andrea feels quite strongly that the initial aggressive attitude that Cameo displays is really the complete opposite — she’s actually very timid and needs time to build confidence in her handler. When you think about what Cameo’s life was like before she was rescued — stuck in a stall all the time with no handling — it makes sense that trust would be a huge issue for her. In many ways, it’s absolutely inspirational that she’s able to trust anyone at all. There is no doubt that Cameo is a brave and courageous filly to be able to overcome such a start in life. 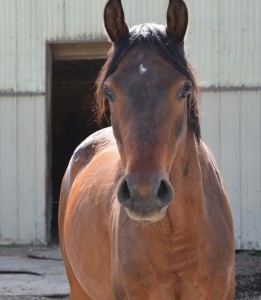 Cameo’s lessons under saddle are progressing very well, and she’s going nicely at all three gaits. We’ve had the opportunity to see her going under saddle, and as you can imagine, it’s very emotional for many of us who feared she’d never make it this far. However, we’re still not quite ready to share her progress with a video yet…Cameo still lacks confidence under saddle, she’s very sensitive, and she can be spooky in the arena. We’d prefer to give Andrea the time she needs to work through Cameo’s issues before we’ll be ready to share her on video. We are absolutely thrilled with the progress she has made, and we have complete confidence in Andrea’s plans for proceeding with her education. At this point, Cameo will probably need to remain in training for another 30–60 days before she is at the level that Andrea normally sends them home at. We made a decision when Cameo started training that we were committed to seeing her through it, even if it takes longer than what we consider normal.

The best possible outcome we could hope for here at SAFE would be for Cameo to find her adoptive home now, while she is still in training with Andrea, so that her new person could work with Cameo under Andrea’s guidance. Cameo is a lovely mare, a beautiful rose bay with a tiny star who will no doubt turn heads in the show arena. The person that she ultimately bonds with will have a true friend for life. Cameo is likely to be a one-person mare, and the friendship and bond that she will share with “her” person will be remarkable. She’s got so much to offer to the person willing to make a leap of faith with her. Surely that person is out there for Cameo.