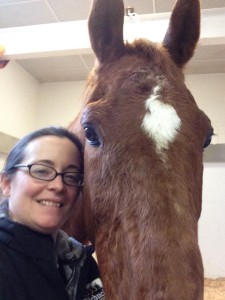 Anakin continues to make progress in many important ways. He’s slowly gaining weight–topping the scales at 856 lbs at yesterday’s weigh in — and his appetite remains hearty. He’s drinking plenty of water, passing manure, and his protein levels seem to have stabilized. He did appear to have a mild episode of colic over the holiday weekend, but after a dose of banamine, he seemed fine again. He’s getting outside for short walks with the help of Pilchuck vet techs, which has got to be nice for him after so many weeks of stall rest. His attitude remains reasonably positive, and his behavior is, as always, perfect.

But there is one area in which he is not making progress…and that is his ability to stand up unaided.

Anakin has been at PIlchuck for nearly two weeks now, and he’s established a pretty steady routine. He’ll spend most of the day on his feet — eating, mostly — then typically around 4am, he will lie down in his stall for a nap. When he is down, he can easily shift between lying flat out on his side and rolling up onto his sternum. The staff will let him stay down for about 6 hours, before using the hoist to get him back on his feet. Occasionally, he will make an attempt to stand by himself, but he’s still not able to get enough push from his back legs to lift his hindquarters. However, even with the help of the hoist, he will often make no attempt to participate in the process, preferring to let himself be deadlifted off the ground until he can be persuaded to straighten his legs and stand. It’s as if he knows he can’t get up so he doesn’t even want to try. 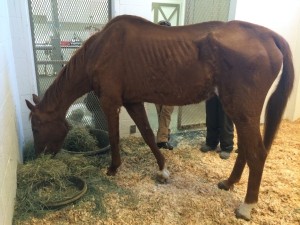 The reality of Anakin’s situation is this: he is a 20 year old horse who has been through a horrific amount of neglect and starvation. We know that he is still very weak, and that he has very little muscle in his hind legs, even now, four weeks after rescue. What we don’t know is what else is going on in those legs. It is certainly likely at his age that he has at least some arthritis. Perhaps attempting to stand is causing him pain? He’s now getting a daily dose of Bute for pain relief in hopes that might help him, but so far, it’s not making much of a difference. And we will have to look at bloodwork again midweek to make certain that his kidneys are handling this medication okay.

All this is costing a lot of money, as you can guess, and we are just so grateful to everyone who donated in Anakin’s name and made it possible for him to get this level of care. Keep thinking good thoughts for him, and we hope the next update will be a better one!