Another Challenge for Jewel

During the major windstorm last weekend, SAFE horse Jewel was injured. We discovered a 2” laceration across the back of her left hind pastern. The cut was deep enough to warrant an emergency vet call, and Dr. Penny came out to take a look (driving around multiple downed trees to reach SAFE Harbor!) Fortunately, there was no tendon involvement. The wound was clipped, cleaned and treated. It was in a location where stitches were not an option. So the leg was carefully wrapped to keep the wound clean and Jewel was put on stall rest. Antibiotics and pain relievers were prescribed. Aftercare instructions included every-other-day bandage changes.

At first, Jewel tolerated the treatments well. But she eventually grew tired of it and over the recent weekend the bandage change turned into a major battle. With oral sedatives on board, three people working to distract her, and multiple restraint strategies in play, Jewel was determined to lob strong kicks at SAFE Barn Manager Terry each time she attempted to touch the leg. After it became apparent that the safety of the handlers was in jeopardy, the decision was made to call the vet out (another Saturday emergency call!!) to utilize IV sedation to get the bandage change completed.

Jewel continued to battle, even after IV sedation, and the vet (who initially found it amusing that he was being called out for a bandage change) agreed it was necessary and suggested that she would need sedation again for the next treatment. Fortunately, the wound is not infected. But it is in an area where movement inhibits healing, so Jewel is on lockdown in her stall to try to facilitate the healing.

Jewel has been a tough nut since the day she became a SAFE horse. We have worked hard to teach her that people can be trusted and are her friends. Terry has invested significant time teaching her good manners on the ground. It is unfortunate that this injury has created a situation where Jewel’s opinion of people has been negatively impacted. We will get her through this medical issue, and then go back to work on her trust and behavior. We are committed to this young mare and helping her become a good equine citizen so she can find her forever home with a person of her own. 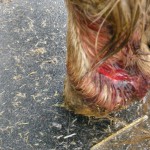 The injury when we discovered it. 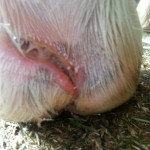 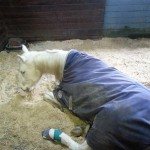