Another Chance for Maggie

It always makes us sad to hear that one of the SAFE alumni is looking for a new home. While it’s our intention that every adoption will last forever, we understand that situations change and sometimes horses have to be rehomed. We do ask that our adopters take responsibility for finding an acceptable new home with someone willing to sign and honor SAFE’s adoption contract, and most adopters are willing and able to comply with those terms. As you’ll hear us say time and time again, a well trained horse has the best chance of finding and keeping a good home, so when we get word that an adopted SAFE horse is being rehomed while exhibiting problem behavior under saddle…that’s a situation that makes us more than a little uncomfortable.

Such was the case with Maggie, our dear little redheaded Mustang pony who was adopted by a young girl in the Fall of 2013. What at first seemed like a match made in heaven had started to go south. Initially Maggie was getting weekly “tune up” rides from her trainer, keeping her at her best behavior for her young friend. But when that training situation changed, the young rider became Maggie’s sole trainer, and problems began to creep in. Maggie lost confidence and developed some bad habits like spooking and refusing jumps, which in turn made her rider lose confidence in her horse. When SAFE was called in to help, the girl was afraid to ride her pony, her new trainer had deemed Maggie unsuitable, and her parents were looking to rehome her. SAFE opted instead to bring Maggie back into our training program to get her back to the superstar pony she was when she was adopted and take responsibility for finding her a new adopter when she was ready.

Maggie started training as a SAFE horse again in early spring. With the help of Terry and volunteer trainer Laura M, Maggie began slowly to regain her confidence. Through patient horsemanship, Maggie started to relax and lose the tension she was holding throughout her body. “There is something truly endearing in this little mare’s eyes and soul,” Terry remarked. “It was a wonderful experience to take Maggie through this process. Watching the stress melt off of her and seeing the engagement and peace return to her eyes has been amazing.”

Maggie’s second chance came from a family living just outside of Portland Oregon. Megan and Josh were looking for a pony that their daughter Isabel could grow into. Terry spoke extensively on the phone with Megan, explaining Maggie’s sensitive nature, and happily she realized that this was a “horse family” that could work with Maggie and provide the thoughtful and patient training she needs to be successful. When they drove up to Woodinville to meet her, it was clear that they understood her and were more than willing to give her what she would need.

So in mid-May, Maggie went out on trial with her Megan, Josh, and Isabelle. We decided on a longer-than-usual trial period for Maggie, but it’s officially been 60 days since she left us, and all signs point to yes! Although it’s hard having to wait to announce an adoption, doing a trial does give us the opportunity to collect stories and updates to share. Megan has been keeping us well up to date with news about Maggie: 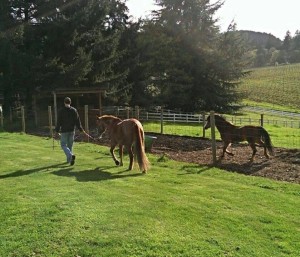 “Maggie is doing well. She and Tucker (their other pony) are quite bonded now. They share everything, including hay and grain!  Which means Tucker is getting a bit fat, but he and my daughter just started lessons, so he’ll be getting more exercise now. Maggie loves to watch our comings and goings with interest.  She nickers at me now when she sees me.

Maggie is proving to be a tough nut to crack, however. She still hasn’t let go of her trust issues. When I work with her, she’s agreeable, but still haven’t seen much true relaxation.  But I’m determined to keep at it with her…I haven’t ridden her yet, but I’m okay with that. I’m not going to force her into something she’s not ready for.”

From another check in:

“Maggie update: the petite princess is settling in well. She is the boss of Tucker and that seems to suit the two of them just fine.  Maggie watches our coming and going with great interest. I have been spending lots of time just grooming her and working on further desensitization. Today she actually approached me when I gabbed the halter — a first. She was really relaxed during our grooming session and lifted each hind foot for me before I even asked for them. 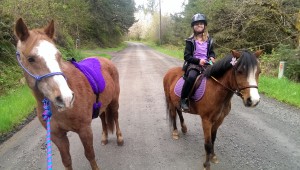 Maggie out for a walk (Isabelle is riding Tucker)

We took both ponies for a walk down the road about a mile.  Me leading Maggie and Isabel riding Tucker.  Both ponies were total rock stars. Maggie was interested in her surroundings but calm and walked politely on a loose lead. We even had a terrible run in with a woman in a truck with some serious road rage.  (She seriously tried to kill us! She gunned her truck full speed at us and then slammed on the brakes next to us. She then called us all kinds of profanities before speeding off. It was so scary and unbelievable! It really upset Isabel and made her cry. Thank goodness for bombproof ponies!)

After the road rage incident, I was hugging Isabel trying to reassure her. (She was still on her pony.)  I felt something warm and fuzzy behind me. It was Maggie. She pressed herself against me and wrapped her head around me in a hug! We stood like that for quite some time. She is such a sweet and intuitive mare. I think she was trying to tell me not to worry.  🙂 We feel so lucky to have her as part of our family.”

Here’s a report about her first farrier trim…we know Daphne Jones, who helped this mare with her farrier issues, will be happy to hear this one!):

“I am happy to report that Monday she was successfully trimmed by my farrier. Even after a two-week break, she let me walk right up to her, halter her and groom her with no issues.  She was an angel while I cleaned all four feet.  She even had each foot lifted and waiting for me.  She was nervous with the farrier and pulled her back legs away a few times, but she clearly was looking to me for reassurance.  My farrier is so good and patient.  He just kept calmly working with her and before she knew it, we were done! Good girl Mags.”

At the end of May, Megan has her first ride:

“Wanted to share special news. Today I rode Maggie! She was such a good girl. I have to admit, I was a bit nervous getting on her. I mean, I never rode her before we brought her home. I never even actually saw her being ridden. LOL Just photos. I didn’t expect any naughtiness, but wasn’t sure what kind of ride she would be. But she’s been doing SO well in her ground work. I “drove” her around a bit before getting on. (i.e. walking beside her holding the reins and steering, stopping and backing as if I were riding. Which puzzled her at first, but then she got the hang of it.) And then I took the plunge and got on. I kept it short and simple. Just some walking and trotting around the yard. I was glad to find she has great steering, brakes and wasn’t overly sensitive. In fact, she was a bit on the lazy side, which is fine by me!” 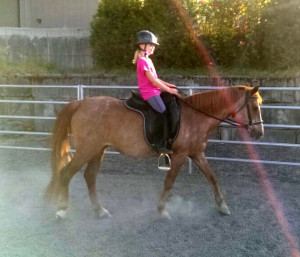 Then this happy update:

“Wanted to share a new pic of Maggie. Isabel rode her for the first time tonight. Maggie is a great baby sitter. 🙂 They just walked around since my dressage saddle is obviously way too big for Isabel. But she grinned the whole time.”

Yesterday, the message that we’d been hoping for arrived in Terry’s email box:

“Wanted to let you know that we are ready to make Maggie’s adoption official.  This weekend we took both ponies to the state park near us for our first off site trail ride.  Maggie was completely awesome.  She took everything in stride and was really good on the trails.  She was more comfortable following Isabel on Tucker, but she also lead when I asked her to.  Josh went with us and rode his mountain bike. By the end of the ride, Maggie was perfectly fine with him riding behind her, in front of her and even right next to her! She really is one smart little mare.

I feel like she and I have really turned a corner in our trust. She really seems happy here and nickers to me whenever I come outside.  All Maggie needed was a confident leader to firmly, yet fairly, give her life structure. She’s so sweet and we all enjoy her very much.

So we want Maggie to be a permanent part of our lives. My only hope is that she stays healthy and sound for a long time yet, so we can continue to enjoy her.”

We are so pleased that Maggie has found a wonderful family to be a part of, and so grateful to them for treating her with the patience and kindness she deserves. Thank you for giving Maggie her second chance, and happy, happy trails!!