The story of how April came to be a SAFE horse is a sad tale: she lived alone in a small muddy pen, her owner barely cared for her, and often she had nothing to eat but stale bread and potatoes. Her living conditions had already attracted the attention of Animal Control, but it wasn’t until she got tangled up in barbed wire that her owner finally surrendered her to the authorities. The barbed wire cut a 5” long and 4” wide gash into the muscles of her neck, exposing and just missing her jugular vein. When SAFE agreed to take her, it was uncertain if she would even survive her injury. Fortunately, our vet was able to suture the wound closed and stave off infection until it healed with minimal scarring.

Once recovered from her ordeal, SAFE sent April into training to be a riding horse, where she proved to be an excellent student. For a long time, we considered her one of most promising horses available for adoption. We did notice that she was very dominant with other horses, and cautioned potential adopters that she’d need to be introduced carefully into a new herd because she had a tendency to kick and act aggressively towards other horses. This behavior was troubling to us, but there are plenty of horses who don’t get on well with other horses, and plenty of horses who have to be kept separated because of this.

As her training progressed, it became clear that April was physically not quite right. There were periods of time in which she did quite well in her under saddle work, but they were always followed by periods of lameness. April was given long periods of rest and time off work, but still she did not remain sound. She began to show definite signs of pain with a rider on her back, throwing her head in the air, and refusing to move forward. When she did move forward with a rider, it was very reluctantly and she consistently dragged her toes. On the ground, we started noticing more ear pinning, angry faces, and grumpy behavior. We began to suspect that she was experiencing some form of back pain. She received chiropractic care, which helped a little, but did not return her to full soundness.

Based on April’s symptoms, our trainer, Brittney Stewart, became concerned that April might have kissing spine or a similar condition. This spring, our vet examined April and palpated her spine and agreed that kissing spine was certainly a possibility. Kissing spine is most commonly found in the vertebrae of the thoracic spine, which is area that lies right beneath the saddle, which is where both Brittney and our vet felt she was experiencing discomfort. Horses with kissing spine often display avoidance behavior when ridden, which is understandable given that the saddle puts pressure on the affected vertebrae, causing them to rub together painfully. 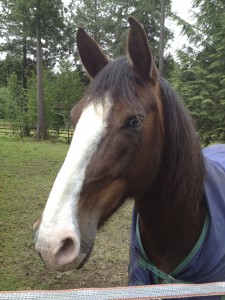 In order to confirm the diagnosis, we would need to have our vet perform additional expensive diagnostics. It was at that point that we began to have a difficult discussion about April’s future. If diagnostics confirmed a back issue such as kissing spine, it would be extremely difficult for SAFE to justify the cost of trying to treat it, with little promise of success. Had April, at one point in her life, had good experiences being comfortable as a riding horse on a consistent basis, we may have had a foundation from which to attempt to rehabilitate her. Unfortunately, this was not the case. We could not justify either the expense of treatment or the discomfort of rehabilitation for a horse who had shown no ability to hold up to or enjoy being ridden. It was time to look at retirement options for April, hopefully as a companion horse.

However, once again, we were faced with a problem. A companion horse needs to be able to get along peacefully with other horses. Sadly, April has never been that kind of horse. Since coming to SAFE, she has displayed aggressive, dominant behavior towards all other horses except for one, Zanadu. When she lived in the main barn at SAFE Harbor, she pinned her ears and lunged at her neighbors. Moving her out of the main barn into a more separated paddock seemed to make her calmer for a while, but even there, she began getting more and more demonstrative toward horses working in the arena, or even passing by her area.

The other problem with turning April out to pasture is her weight — after a summer spent on grass during one of her rehab periods, she gained so much weight that we were concerned she might founder. We suspect that her diet of starches in her early life may have altered her metabolism to the point that keeping her in a pasture situation long-term would be dangerous to her health. At SAFE Harbor Stables, we were able to slim her down by watching her diet and keeping her in a gravel or dry lot paddock. Which might be okay for a horse that’s getting regular exercise. With April’s lameness, she is facing a life living in a dry lot, with no friends and no “job.” Even that wouldn’t be the worst thing for a horse were it not for the fact that April doesn’t seem to enjoy it. She displays boredom behaviors like wood chewing, and eating poo, she hates her neighbors; and just generally appears depressed/unhappy in that scenario.

Therefore we made the difficult decision to put April into our Hospice Program …to give her one last summer to live in a field, eating as much grass and hay and treats as she wants without having to worry about her weight. At the end of the summer, we will let her go, as kindly and as painlessly as possible. April is currently living at a foster home where she has spent a lot of time previously, in the care of someone who loves her very much.

On a recent visit, we were saddened to see that even in her current situation, with only one horse to interact with, April is still acting aggressive and angry, baring her teeth and lunging at her one equine companion, at her foster mom’s dogs…even at us as we stood by the fence. She does seem content to graze in the sunshine, but she can only do that for so long. This is not how we wanted April’s story to end — we had big dreams for this mare — but she has made it clear to us that she is not in a state in which happiness is possible. We could opt to keep her alive, living alone in a dry lot on a never ending diet, but we feel it would be kinder to just give her one last summer before we say goodbye and set her free. On the day that she passes, we will surround her with love and know that she was saved from a far worse fate. She will never feel pain, she will never be hungry, and maybe, hopefully, in some sense, she will never again have to be alone.