Obviously, adoptions are special to us…nothing makes us happier than being able to announce that one of the SAFE horses has found a home. But every so often, an adoption will fall into place that just reaches into our hearts and gives a little squeeze. An adoption that makes us pinch ourselves to be sure we’re not dreaming. On Saturday afternoon, over birthday cake and carrots, we celebrated one of those adoptions…and today, we congratulate Bucky B Lucky and Ruth J for finding each other and making this dream a reality. 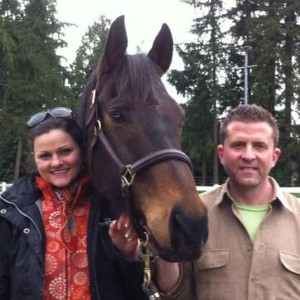 I would describe this match as love at first sight, but it’s important to recognize that Ruth’s decision to adopt Lucky was made extremely carefully and deliberately, with careful consideration of Lucky’s needs and Ruth’s ability to provide for him. Many questions were asked, much research done. But the spark was there right from the start. In terms of what Ruth was looking for, Lucky fit the bill in just about every way: young, athletic, lovely gaits, and the talent to perform at the lower levels of dressage. He’s not an easy ride, and he has the ability to be a handful under saddle, but as a professional dressage trainer, Ruth is more than capable of dealing with the hijinks of a young Thoroughbred.

But for those of us at SAFE who stuck with Lucky through thick and thin, gave him the benefit of the doubt when things were tough, and always believed in him, we are celebrating what Ruth means to Lucky. See, Ruth is someone who doesn’t give up, who would never turn her back on a friend, and who does not expect that the things in life worth having should necessarily come easy. As she herself puts it, she’s German, she doesn’t quit. Lucky is Ruth’s second horse — her first horse is an enormous handsome Percheron named Jack. To say that Ruth and Jack have been a lot together would be a bit of an understatement, as anyone who knows them will attest. Ruth’s loyalty and devotion to Jack over the years has been incredible. Ruth has never let her own goals or ambitions get in the way of what was best for Jack, even in the face of medical and lameness issues that would have caused most of us to give up.

Lucky, on the other hand, is a horse that has been given up on before…several times before in fact. And like many Thoroughbreds, Lucky has a pretty clear understanding of how the people around him feel about him. If every horse is a mirror, Lucky is a full-length three way department story changing room mirror! If you’re ambivalent about Lucky, don’t expect much from him. If you dislike him, you’d better keep your distance. But if you treat him with kindness, respect, and love, he is the sweetest horse in the world.

So when Ruth told me that she was very interested in Lucky, all I could think about was what it would be like for this horse to spend the rest of his life with someone who would not give up on him, who would show him loyalty and devotion and unconditional love. I pictured a Bucky B Lucky who knows he is home, who knows who his person is…and all I could imagine was that he would absolutely blossom with someone who would give him that kind of surety and security. 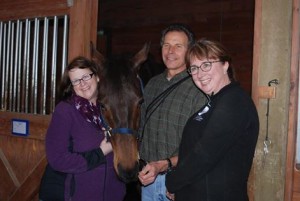 I saw that horse on Saturday. He’s been on trial with Ruth for about three weeks now, and already he looks like a better, shinier, calmer, and happier horse. He radiated happiness. He even looked taller! It was really something to see. Saturday was Lucky’s 10th birthday and Ruth threw him a party and gave him the best gift she could think of: the gift of a permanent home. Lucky’s trial is over, his adoption is official, and we can share this news with all of you today. At the party, in between photo opportunities with the Man of the Hour, Ruth told me that Lucky — now christened Lorenzo — was not perfect, and already he’d tried bucking under saddle to see what she would do. She just laughed. That’s what unconditional love is…a love that is there when you’re good, and a love that is there when you’re not so good. Knowing this, there is nothing that will stop Lorenzo and Ruth on their journey together. We could not be happier for them!