Our WONDERFUL foster mom Carrie brought the Finn and Joey for a visit during the last Joel Conner clinic. She had this to report about the experience:

The boys both enjoyed their field trip out to SAFE for the Joel Conner clinic! They loaded into the trailer like it was no big deal, and even though neither Finn nor Banjo had been to the new barn before (or left my place for a year, except for walks on the Tolt Pipeline), they settled right into a dry lot next to the arena.

Banjo and I participated in the groundwork clinic in the outdoor arena while Finn stood by munching hay and whinnying–he was lonely being 20 whole yards away from his buddy. Joe was easily distracted as I’m pretty sure he’s never been in an arena with 10 horses before, let alone the new SAFE property, but we worked through the jitters and by the end, he had really sharpened up. We worked on him getting his feet moving under himself, which is hard for him due to stiffness in his hind end, and also some space issues–he was crowding me going right at the start of the clinic. Joel helped snap him out of that and we’ll keep working on it at home.

He was so relaxed by the end that he was falling asleep standing up, and he did his ridiculous eye-rolling, body-shaking yawns that he has a hard time stopping once he gets going. He makes the best faces.

Now for the foot report, since they’re both so special. Finn’s feet have much improved; he hasn’t been in Softrides for over a year. He mostly goes out barefoot and braves the short walk over gravel to his dirt paddock just fine. When we go out on the Tolt Pipeline for a walk, he wears his Easyboot Gloves. Joe’s coronary band issues have calmed with prednisone, and they look mostly normal now that the cracks have healed and his hair’s laying flat–even his flaky frogs with the deep crevices have evened out over the summer. His hooves themselves are super tough–no issues with chipping like Finn. It looks like we’re going to have a fast transition to wet fall weather so I’ll keep a close eye on things! 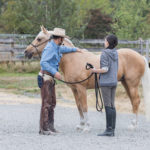 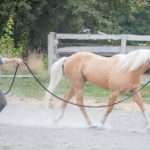 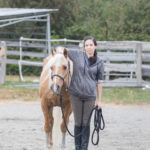 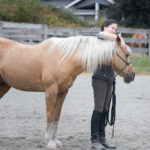 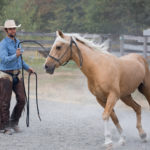