Another Perspective on Bridgit 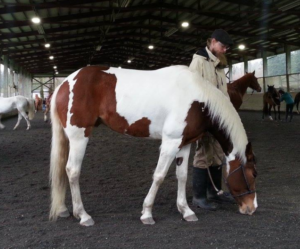 Here is a letter from Ian about his time getting to know Bridgit and working with her in the Joel Conner clinic. Ian is a wonderful horseman and a absolute joy to have volunteering at SAFE. I am very happy that he enjoys working with this very sweet mare!

Hi Terry,
I really want to thank you for getting the two of us to be ‘friends.’ Every session with her is a great experience, and the clinic was no exception. I had some initial nervousness — this was my first (ever!) clinic participation, and I had only a quick chance to “rehearse” some groundwork with Bridgit on the Thursday prior. Like many of the horses, she knew something exciting was going on, and had a good bit of energy in her stall when I groomed her. However, it occurred to me that she’s done more of these than I have, and I could learn a lot from her about it.
Leading her to the arena she shied away from the new floral planters at the entrance, which she had also done during the Thursday session when they were newly placed. Thursday, it was a full on spook — the only time she’s ever done that with me. At the clinic it was just a wary look, and a little more energy than was necessary coming through the arena entrance. I knew she needed me to take charge before she would calm down. I took her to into the arena to a space where we could work for a bit. After warming up with yielding the forequarters, backing, and circling at a walk first, then the trot, she was willing to settle into a lazy walk with some lip smacking. At that time, I stretched her by flexing to the halter, and then practiced some desensitizing with the rope. This got the first yawn out of her, and we were ready to get started.
Joel began the clinic by circling some more, which Bridgit now had a good groove for. She can still pull to the outside if her inquisitive mind passes anything interesting, but she evened her circle and loosened up her back, starting her trot with a head low to the ground and her back rounding and getting longer. I could see the mounted work she’s done with Lindsay lately has had a great impact on her natural sense of collection, and I was happy to see her relax further. The “back up then yield the fore end” exercise showed us both where to improve. Bridgit remembers that yielding the shoulder is different from going forward or back, and within the 20 odd minutes of practicing, both shoulders were soft enough to yield with no more commotion than simply raising my hand near her eye. I got to remember the importance of good body position when asking for a front quarters yield.
During the leading along the wall exercise, Joel noticed me being heavier than necessary to cue our backups, driving from the front with the lead rope. When he lead Bridgit, he used so much less energy cuing and much more of an energy of anticipation or gusto. Bridgit liked it a lot. She yawned after that moment, and after Joel got me to “lighten up,” she moved with me so much more willingly. Not only that, but she relaxed even further and yawned several times during the final practice of that exercise. At the end, we all gathered our horses around to listen to Joel’s wrap-up, and Bridgit yawned THE WHOLE TIME. Every time I looked at her, she was yawning. She had clearly let got of a lot of tension during the clinic, she even moved like a different horse. Also, I’ll be using the backup/front quarters exercise with all other horses.
Bridgit is so incredibly smart, she picks up on everything so quickly. This does mean that she spends a bit of time challenging me in the beginning of any session, looking for reassurance of leadership. Once I get her feet yielding and moving she can be so sweet and placid that little will phase her. All the same, she meets everything I do with so much try — I really think there’s no end to her potential. She is such a wonderful horse! The thing that gets me the most, is that she really enjoys her time with her humans and can be downright affectionate when she’s relaxed like that.
Let me know if you have any questions. She really is a joy to work with!
Ian LeFae