Well, Bucky sure gave us a surprise today! His weight is looking great, no more ribs, and he’s now wasting half of his mush so I’ve had to cut him back. Allison and Katie decided to take him out and saddle him up and see how he did. He was great for tacking up…he’s just a doll with his little ears! You can see he still has a little bit of that long hair hanging on, but the winter coat he is getting looks quite normal. His feet still need a lot of work but he seems to be moving soundly. 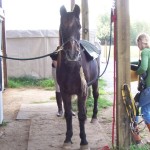 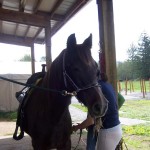 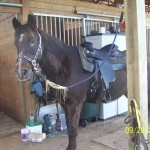 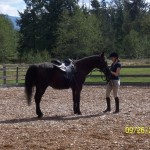 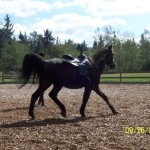 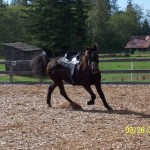 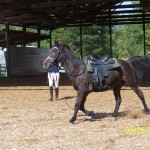 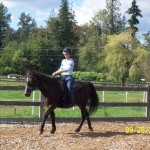 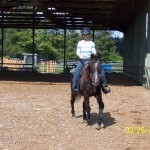 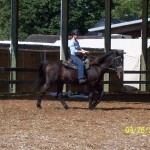 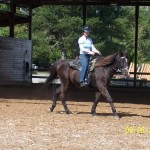 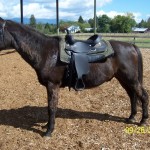 We put him on the lungeline for a few minutes to see how he was. He doesn’t lunge super well, and he surprised us by being pretty excited, putting his tail up and letting out some cute little bucks. But once he started moving, we noticed he moves a little strangely. We couldn’t decide…is he lame or footsore on all four feet, or is he gaited??

But once I got on him, it was pretty apparant that Bucky is, in fact, gaited. He was like butter to ride…I absolutely had a blast. I have never ridden a gaited horse before so forgive me if I don’t know how to describe his gaits. He has a very smooth running-walk like gait where your butt barely moves in the saddle, and another trot-like gait but there is barely any bounce at all. And then a canter-like gait but there is more like a side-to-side motion without the moment of suspension like a true canter. In any case he was SUPER smooth. I don’t think he was a gaming horse at all. He really was quite sensible, although a little barn sour and tried to go towards the gate a few times, but he just feels like he is wound up because his legs are doing a lot underneath you. He has a lot of go in him but he was easy to stop and steer and really, really fun. He is very out of shape and he got sweaty pretty quickly but he is really a fun ride!

So what do you think? Could he be Paso Fino, Peruvian, Tennesee Walker? I have no idea of the different gaits..all I know is he was smooth as silk.