Last Thursday, Animal Control officers transported Logan, Skye and Chip from Frontier Park to SAFE Harbor Stables, but the fourth horse that SAFE agreed to take from the seizure did not make the trip. That’s because the officers were unable to even catch Cameo in her stall.

SAFE trainer Brittney Stewart set aside the entire day yesterday to drive down to Graham to work with Cameo and attempt to convince her to allow herself to be caught. With no time table in mind and her husband Darby along for support, Brittney knew that she could allow Cameo all the time she needed to accept and trust her.

In the end, it took an hour and a half of gentle, patient coaxing in the stall for Cameo to be caught. It took another 10 minutes to convince Cameo that it was safe to step outside the stall, and remarkably only 15 seconds of hesitation before she jumped right into the open trailer.

Cameo is now safely ensconced in her stall at SAFE Harbor, and now begins the long process of convincing this unhandled and frightened filly that people are good and kind. Cameo is a living reminder that animal abuse comes in many forms besides just starvation. Horses need fair, consistent handling on a regular basis if they are ever going to be able to live safely among humans. Letting a domesticated horse grow up unhandled and untrained is wrong because in the end, when you’re left with a huge dangerous animal, it’s the horse that will suffer. Cameo is lucky that she is young, smart, and that she has a lot of people on her side who are going to help her learn and grow. Other horses are not so lucky. So once again, thank you to Pierce County Animal Control for taking action in this case. It was a bold move, but hopefully it will send a message that anyone having far more horses than they can reasonably care for is a crime that will not go unpunished. Horses like Cameo have suffered enough. 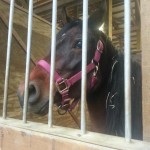 Cameo in her stall 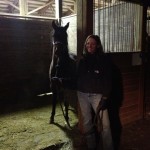 After 90 minutes, she allows herself to be caught 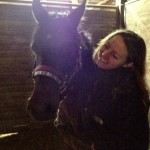 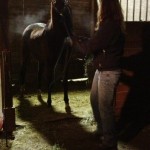 Now it is time to step outside 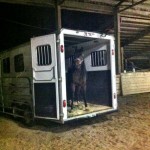