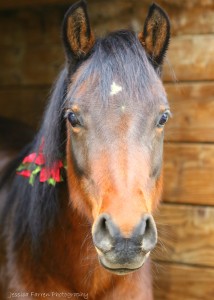 Cameo at the Holiday Open House.

Cameo continues to make good progress in her rehab from last July’s injury. Volunteers have been walking and trotting her in hand for the past several months. Cameo is a pretty good girl for her exercise sessions but she is easily spooked if there is too much noise or commotion near the arena, so her handlers have to stay on their toes.

We are now able to saddle her up for short walks with a rider on board. She will occasionally show some stiffness afterwards, but overall her progression has been uneventful and steady. Her walks under saddle are progressively getting longer and very soon, we’ll start trotting her.

In order to keep her quiet, we have not been turning Cameo out. Winter turnout at Safe Harbor takes place mostly in the covered arena. Once we get the all clear from Dr. Fleck, she’ll have the opportunity to spend time out in the arena with a calm horse as a buddy.

Cameo is a very smart girl and she knows her people.  If you are new to her, or if you are a little bit timid in her presence, she will definitely take note of it! She takes direction well but you must be aware of her and establish a kind leadership with her from the beginning.

We have a volunteer horse masseuse, Lori M, visiting Safe Harbor once a week and Cameo is enjoying her gentle massage work. Cameo loves attention. Her favorite thing? Getting her forehead rubbed. Which is, of course, the best angle from which to appreciate her beauty!

Volunteer trainer Laura McCorkle has been working with Cameo for a long time now, and has really gotten the chance to get to know this mare on a whole new level. She provided this update about her work with Cameo:

Poor Cameo — she’s the Queen of Walking Big Ovals! This beautiful girl has been in rehab for a very long time, trying to get her hamstring back in shape for riding. Half an hour of hand-walking/trotting day after day, week after week, month after month can get B‑O-R-I-N‑G!

Cameo being Cameo, she looks for drama around every corner (and frankly, who can blame her?). A falling leaf — a passing breeze — a raindrop — all these and more can be used as fuel for a classic Arab buck and snort, but a quick sarcastic raised eyebrow and a “rEEEEally?!” from her handler is all it takes, and she drops the drama. She really is a brave, sensible, spirited little beast…she just needs reminding every now and then.

Since the routine is so boring, we’ve been working on getting ready for being ridden again, hopefully soon. Cameo’s favorite cheat is leaning on you with her inside shoulder and looking to the outside, so we’ve been doing some groundwork as we walk — getting her to maintain the correct bend, and asking her to move off inside “leg” (pressure directed at her side with the tail end of the rope, a hand, or an arm draped over her). We’ve also worked on calm, light transitions between stop, walk, fast walk, jog, and trot — mixing it up a bit as we walk around. And around. AND AROUND.…

She seems to appreciate the “games” we play and likes to have some mental work along with the physical. Cameo is a horse who is THIRSTY for tasks to focus on — this horse wants a JOB. We’re doing our best to keep her happy, even though she’s not ready for too much yet.