Cameo got her feet trimmed earlier this week. Brittney reports that while Cameo seems to be getting over her fearfulness, and is no longer shaking in fear as she leaves her stall, she is now exhibiting some truly bratty behavior when it comes to allowing herself to be caught. Brittney and our fabulous farrier Daphne Jones spent more than 2 hours playing good cop/bad cop with her. She pulled some mean faces and even kicked out at them a few times, but she eventually she figured out that they weren’t going to just go away and relented, allowing Brittney to throw a lead rope over her neck like normal.

Once caught, she acted like she had her hooves trimmed before. She had a few more moments of sassy mare attitude but gave it up quickly.

Brittney has been catching Cameo on a daily basis and lunging her.

Thank you to Chelsey Braswell for these photos of Cameo in her paddock at SAFE Harbor. Chelsey says that as cute as they are, they absolutely do not do her justice — she is even cuter in person! We love her coloring — Jet describes it as “rose bay” which is very apt. 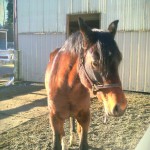 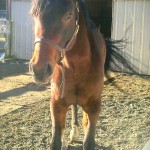