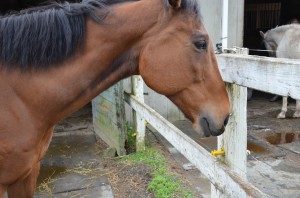 Brittney’s had the opportunity to work with Chance a few times since his arrival at SHS, and she likes what she sees so far. She says he’s a good boy, and she’s even tried having one of our volunteer riders hop on him and he did very well for her too. He’s pretty unfit, so he’s crossfiring in the canter and getting himself a bit discombobulated, but with more work, she’s confident he’ll work through those problems pretty soon. She’s planning a trail ride for him in about two weeks to give him some more time to gain fitness.

Chance has had to adjust to the hustle and bustle of SAFE Harbor Stables, which is a bit different from the quiet, private home where he’s been living for the past several years. Reports of his ear touching phobia have turned out to be quite true—Brittney says that he seems extremely worried that she’s going to forget and touch his ears, and he does not like that one bit! So bridling him is quite a chore…she has to take the bridle apart to get it on him, she can’t just unsnap the browband. This will probably be a challenge for his new owner as well, but we hope that when the right person comes along for Chance, he or she will be willing to accept this quirk of his and work around it in order to keep him happy. He’s a big, sweet goofy boy, and he’s certainly worth a little bit of extra effort!