If you’re a fan of Dutch Mills Farm on Facebook (and if you’re not, you should be!) then you already know the incredible news that we have for you today: Charmeon is adopted!! Congratulations and a huge, happy thank you to Helga Roberts, who came to the realization that her life would not be the same without Char in it. We are overjoyed that Char has found herself such a wonderful home, and we look forward to witnessing the many happy years that she and Helga will have together. 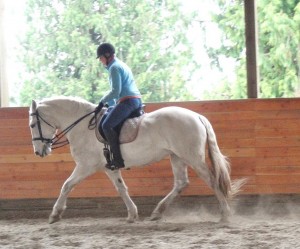 Adoptions like this one make us look back in wonder at the road that each horse took on its journey to its forever home. Charmeon was rescued from a PMU farm by her original owner, who had her for five years before a severe financial upheaval caused her to have to give up her horses. Charmeon’s owner cared a great deal for this mare, and even sold her furniture and other possessions to pay for two months of training to get her started under saddle. As a SAFE horse, Char was initially placed into a home as a “husband horse” to a man who wanted to do competitive trail riding with her. Unfortunately, Char had shown a tendency to use her size to bolt away when being led, and she escalated that behavior in her new home. Heartbroken, her adoptive family asked to return her to SAFE and because we had experienced the bolting ourselves, we elected to take her back. She was immediately sent back into training for a refresher course with Andrea Lucianna, and Char soon figured out that she could not pull that particular trick on an experienced handler!

Char passed her retraining with flying colors. Then an amazing opportunity came her way. Helga Roberts, owner and head trainer at Dutch Mills Farm, offered to foster Char and continue her training. Char moved to Dutch Mills Farm last October, and Helga has been singing her praises since the day she arrived. Char was given an amazing opportunity to be part of a barn family, and even carry one of Helga’s students to victory in a recent dressage schooling show. There was a fair amount of interest in Char, and a few showings, but the right adopter never quite appeared. SAFE Adoption Manager Sara Hall summed it up best when she commented, “At one of the first showings I did up there with her, I remember thinking to myself that Char had already picked her person. Funny how it works out that way, isn’t it?” As it turned out, Char’s person is Helga.

All of us at SAFE wish Char and Helga the very best!