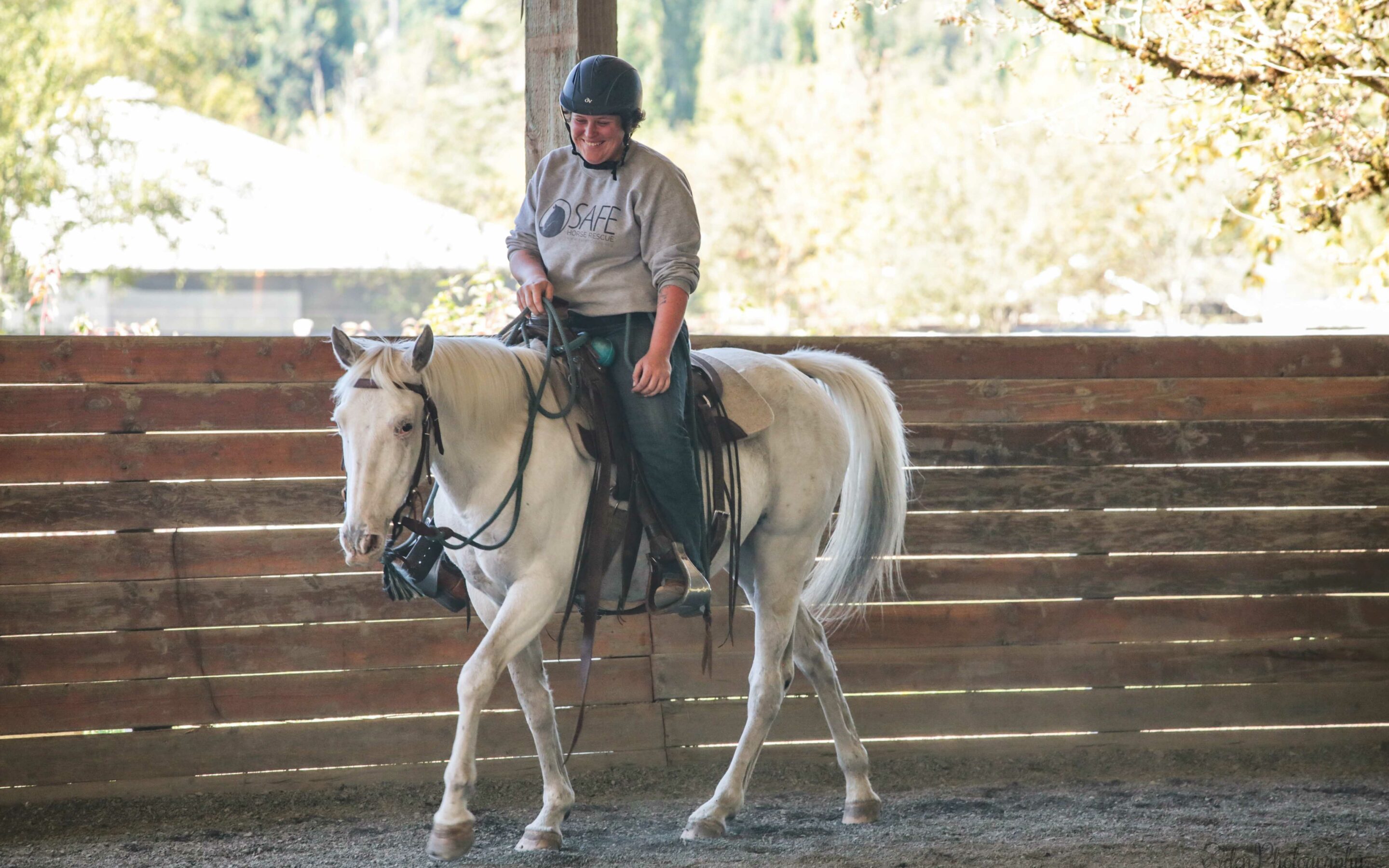 Darla has been sound since August, and in regular work with Kaya since then. She has certainly come a long way from the nervous mare we met at the end of last summer, and while she is still quite sensitive about things, she grows a bit more comfortable in her skin with each week that passes.

And that’s certainly not a result of just sitting around. Darla’s increased (and increasing) comfort is a result of many hours of work, both on the ground and under saddle. For Kaya, Darla is a great example of how well this style of horsemanship can work. From the point at which they started up until now, Darla has reached a place where she is able to find relaxation faster, and has really found the freedom within herself to let down a bit. There was a time when Darla’s head was at a constant elevation – her neck could have rivaled a giraffe’s for how extended it was. Anxiety poured off her, and it was almost palpable how stiff she felt. But over time, that head has come lower and lower, and she no longer has to crane her neck to feel secure.

Darla is currently going well at all three gaits, and though she still needs work on freeing up her feet moving forward, with each ride she gets a little softer. She is very soft to bend and in a soft feel, and is coming along well with her lateral work. Foundationally she is overall pretty solid, and grows stronger by the day. She’s had her first rides in the big arena, and is doing very well, with or without other horses. She participated in the September Joel Conner Clinic alongside Kaya, and the pair did swimmingly – it was Darla’s first time amongst the activity and occasional chaos a clinic setting can bring, and she kept her cool the entire time. She even went for a walk through the park a few weeks back, and had a successful ride in the arena there. Darla is expanding her horizons and bravely taking on new challenges with each passing day.

Of course, there remain hurdles. Darla still has a difficult time changing eyes. She considers the rope to be a big deal, and is reluctant to give to pressure when roping her by a hind foot. Her sensitive nature means she is worried about things sometimes, like the snap of the saddle strings or an object swinging overhead. There are little mystery scares to excavate with Darla, which Kaya accomplishes by helping her to free up her feet and prove that there is nothing to fear after all. Darla’s comfort arises in her ability to feel free, which cannot be achieved without a high level of confidence in her abilities. Darla’s path towards this confidence is often an uphill one, but one which she has great support on as she traverses.

It will still take some time before Darla is settled fully in herself as a confident, steady mare, but if the admiration in Kaya’s eyes when she talks about her tells you anything, it’s that Darla really is something special.