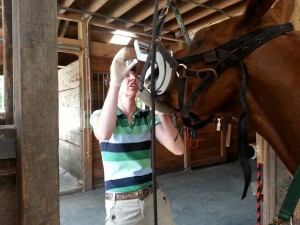 Yesterday was a marathon day of dental care for the horses at Safe Harbor Stables. Dr McCracken of Rainland Equine did seven floats and some lameness consultations along with them. Here’s a rundown of how each of the horses did:

Annabelle was not terrific about getting injections for her sedation, but considering it’s probably been several years since she’s seen a dentist, her teeth were in reasonably good shape. Some sharp points but nothing significant.

Jewel was a pill for her shots, but her teeth were in great shape. Dr M said that based on her teeth, Jewel is well into her 4th year and could be closer to 5! (For the record, we’re going to leave her at four!). Nothing too conclusive about her thickened left front knee. Dr McCracken said Jewel could have had soft tissue damage at some point and has some arthritis in that knee. It’s unlikely that it’s a bone chip since those generally happen more in the knees with TB race horses, but we might x‑ray at some point to take a look. 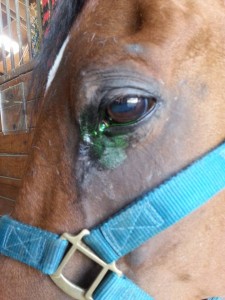 Oscar did considerably better for his shots, and his teeth looked good, but he does have some extra large spacing between some of his teeth on one side, which means that food can get trapped there and cause decay. She cleaned it out and said if he is good for us we can help by squirting water into his mouth to help flush his gums and remove anything that gets stuck in there. Dr McCracken also flushed his left eye to see why it is always tearing. There was no clog in his tear duct. She also examined his eye using a little stain to reveal ulcers and scratches, but everything looked normal.

Bridgit was an angel for her shots! Her teeth looked good too. But here’s another surprise: Dr M puts her age closer to 3 years old!! She is still losing baby teeth! Bridgit popped a splint a week or so ago and Dr M advised us to give her another 3–4 weeks off until there is no heat in the area. No that means that Bridgit won’t be at the SAFE Horse Show this year. In fact she may end up going back to foster along with Sophie, which would be awful for her because she’ll have nothing to go all day but graze, snooze, and play in a huge pasture. Poor Bridgit!

Lola we knew would be bad for her sedation, so we did an IM sedation to start and let that soak in, then came back to start the dental. She was still too awake so did have to give her more drugs this time IV and still not great for it. But her teeth were in good shape which made the procedure quick and painless. We will need to work on Lola’s aversion to seeing the veterinarian. She can be very difficult to handle when she sees them coming. Fear based issues can be hard to overcome but it is important we help her through just like any other training issue. Lola has her strong opinion and self preservation and while we love her for it, it’s what makes her our endearing “sass-apolussa mare”, we need to help her stay safe and understand vets are there to help her feel better.

Khianna was good for her shots, but her teeth showed more sharp points than you’d expect to see considering she was floated in January. Dr M suggested that we plan to have her teeth looked at and possibly floated again in 9 months.

Finn also handled his shots like a pro, giving Dr M the chance to do an in-depth evaluation of his jaw, which has had some unusual swelling for about the past month. The swelling has gone down some and she thinks it will just take more time. His teeth are very, very weird with the right top long, right bottom short, left top short and missing some and left bottom extremely long. She took a lot off the tall areas and it took a little work but she did get to a point where there was some contact now on both sides. It is a slow process to correct his teeth and he will continue with the 4–6 month dentals for a few more times. Dr M can only take so much off at a time and keep the tooth alive. He is a very sweet boy even with his funny teeth.