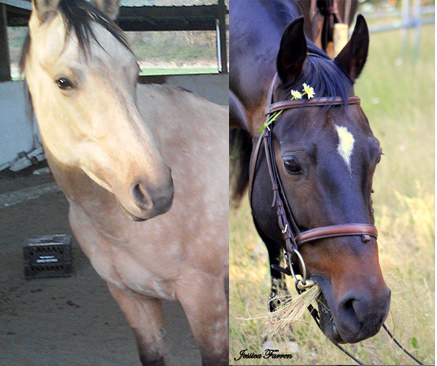 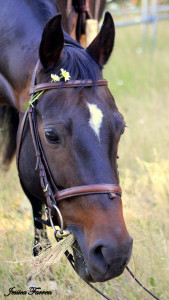 There is a reason that we celebrate the small victories and fairytale endings here at SAFE: keeping our focus on the positive aspects of the work we do gives us the strength and energy to keep doing that work. Because in between the amazing transformations and the unforgettable stories, there are moments when the injustice faced by these horses is nearly unbearable and there is no happy ending. Last week, for the first time in the history of SAFE, we had to give horses back to an abuser.

Ivy and Boone came to SAFE after being seized by the City of Snohomish as part of an animal cruelty case in January 2015. Normally, once a law enforcement agency signs ownership over to SAFE, we can start the process of rehabilitating the horses and then actively seek out adopters. In this case, it became clear that the defendant was going to fight to have the horses returned, so SAFE opted to hold off on offering these two for adoption, even after they were rehabilitated. 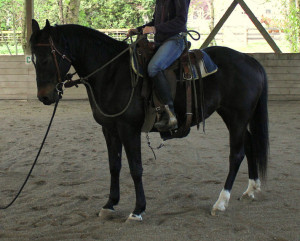 Last week, the district court judge overseeing the case ordered that Ivy and Boone be returned to their owner. Not because their owner was found innocent of the charges she faced, but because of a problem with the warrant that the officers used to seize the horses. There was no misconduct on the part of the officers involved; the issue involves the interpretation of municipal codes and the RCW to determine whether the officers involved had jurisdiction to deliver the warrant. The judge’s decision had nothing to do with the merits of the case.

Without a valid warrant, the evidence the city’s prosecutor was relying on became inadmissible in court. The jury would not see the photos or videos documenting the horses’ condition. They would not hear the veterinarian’s findings. Several key witnesses would not be allowed to testify. Without the evidence, the prosecutor could not take the matter to trial. Instead, he has appealed the judge’s ruling to a higher court. That appeal could have long reaching ramifications on police-related procedures, not just locally, but statewide.

Ivy and Boone are no longer in the care of SAFE. Last week, we cooperated with the defense attorney and watched helplessly as their owner loaded them up and drove them away from us. This is the first time in the history of this organization that we have been forced to return a horse to its owner, and as low points go, it is one of the lowest. Returning horses to a defendant whose case was never tried has delivered a significant emotional trauma to our community. 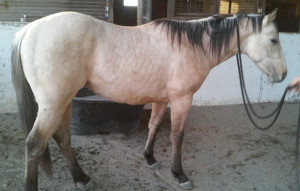 Ivy’s stall remains empty and Boone’s young companions in his foster home still call for him and wonder where he’s gone. We have the small comfort of knowing that these two horses left SAFE in vibrant good health and with greatly improved ground manners. They left SAFE transformed by seven months of the very best food, shelter, and veterinary care we could provide. They left SAFE understanding that they were valued, respected, and loved by an entire community who wanted only the best for them. We miss them, and we hope beyond hope that they are okay.

Right now, however, it is time to share the story of the third horse who was seized along with Ivy and Boone. You need to hear it to fully understand why Ivy and Boone were seized as well. These three horses may or may not have their day in court, but it is important that the whole story be told.

The third horse, “Dillon”, was older than Ivy or Boone, but certainly not elderly…not that age could ever justify the condition he was in on the day we met him. Dillon was severely emaciated with a Body Condition Score of 1.5 out of 9.0. His spine, hips, shoulders, and ribs were prominently visible. His penis hung below his body, swollen to the size of a small football, caused by edema due to starvation. Although there were signs that he had once been adequately cared for, his teeth had not been floated for several years, leaving his mouth filled with painful ulcerations, making it difficult for him to eat.

His hooves were badly overgrown with long toes and underrun heels. Both his hind pasterns were dropped and swollen, possibly due to DSLD and arthritis, but exacerbated by chronic malnutrition and starvation. He stood awkwardly with his stifles protruding, lacking the muscling he needed to hold his limbs in a normal position. He had other injuries: a painful scratch on one of his corneas and a wound on one of his hind legs with a thick crust of pus, blood, and proud flesh that indicated it had gone untreated for quite some time.

But all of these horrors were not the worst evidence of the abusive neglect that Dillon had suffered.

Dillon was blanketed when we arrived, but the blanket was ripped in several places, and clearly no longer waterproof since it was soaking wet. When we removed the blanket, we found that Dillon’s entire back was covered with severe and extensive rain rot. Thick, crusted scabs covered every inch of his topline, his croup, his neck, and even his ears. Dillon and the others had no access to shelter, and the blanket that Dillon wore had created the perfect environment to allow the bacterium that causes rain rot to grow and spread and fester. Beneath that thick layer of scabs, Dillon’s skin was necrotic— meaning the cells were dying.

Rain rot is not an uncommon thing here in the Pacific Northwest; it is something that we see quite often on horses we rescue. It is caused by an opportunistic bacteria that is always present, waiting for the right conditions of moisture and humidity to begin to grow. We see it a lot in horses that are in weakened conditions of starvation and poor health who cannot fight off infection as effectively as a healthy horse.

In the Pacific Northwest, even healthy horses can develop rain rot, so horse owners pay close attention while grooming in order to catch it and treat it immediately. Rain rot presents as a scattering of scabs at the base of the hair and is simple to find by touch. Treatment for rain rot is also straightforward: the scabs are gently removed to allow oxygen to get to the skin below. The area is kept clean and dry, and occasionally treated with over-the-counter medication. When caught early, it usually it clears up quickly. Left untreated, it quickly becomes painful for the horse, but even then, it can usually be treated with antibiotics.

When help finally came for Dillon, his back was essentially one huge thick scab. Removing it was unthinkable. Dillon was humanely euthanized to end his considerable pain and suffering. Putting him down was the only option available, and it was an act of love and kindness to a horse who deserved so much better from the person who was supposed to have cared for him.

Focus on this: a horse had to be euthanized for rain rot.

Had the defendant been convicted, that individual would have been prevented from owning horses for at least two years. Ivy and Boone would have remained in SAFE’s care, and they would have permanent homes and a lifetime of safety.

The judge’s decision about the warrant will be appealed to a higher court. It is our hope that the decision regarding the warrant will be overturned. If that happens, then the case will finally go to trial. But the appellate court has a twelve to eighteen month backlog of cases, so it may be a long time before there is justice for Dillon, Ivy, and Boone. We only knew Dillon for a short time, but he will not be forgotten. As for Ivy and Boone, they have left the safety of our care, but not our community. Remember their faces. It takes a herd to help a horse.

UPDATE: The Appellate court chose not to hear the case, and it was dropped. There will be no justice for Dillon.