Funny, but not funny

I was awake, but hadn’t yet gotten out of bed around 7 this morning, when I heard an unusual racket from outside. Something was on my front porch, something bigger than a raccoon, something…white? With hooves? Sinatra, is that you? 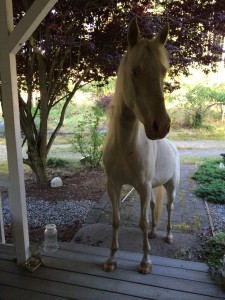 At least he’s not selling Bibles…

You see, Sinatra has learned a new trick in the past 48 hours, and that is that if you stick your head through the fence and just keep moving forward, eventually you end up on the other side. I have lovely vinyl three-rail fencing on my property, and it’s kept the horses safely where they belong until now. But Sinatra figured out how to walk through it — maybe by watching me do it? — and since then, he’s exited the pasture he shares with Honeycutt three times. He did it again sometime between night check and breakfast, and not only did he come up on the porch, he also pulled some things out of the cab of my truck and did some gardening.

Walking through a vinyl rail fence does take a toll on one’s body, so Sinatra has a couple of ugly looking wounds on his neck where he skinned himself…but maybe they just look bad because of the contrast between the red marks and his snowy white coat. When I went to retrieve him and return him to the pasture, he was standing quietly by the barn and he actually looked a little sad. I stood with him for a few minutes, and suddenly realized how badly I have failed this horse.

Sinatra does have it pretty good. He lives in a pasture with his good friend Honeycutt with “lovely hays” delivered three times a day. The two horses keep each other entertained, and there’s always Jay to boss around if Honeycutt isn’t available. There’s shelter from rain and sun, and very little is asked of him. But that’s the problem right there. I don’t do much of anything with Sinatra besides care for him. He’s not currently being ridden, which is one of the reasons he’s in a companion-type foster home, and that is partly because he’s not been sound under saddle for some time now. And I know in my head and my heart that I should be doing ground work with him on a regular basis. I use the standard excuse of being too busy, of not having time. It’s true that I am a pretty busy person. And it was less of an issue when it was just Honeycutt here, because Honeycutt is Mr Perfect when it comes to ground manners. You can leave him sit for weeks on end, and he’ll still perform perfectly when asked to run through a few exercises…or stand for the farrier…or lead to the pasture…or anything, really. But when it came to Sinatra, my excuse was always that I just don’t have time to work with him.

What suddenly struck me as I stood with Sinatra this morning, looking over his scrapes and noticing the strange sadness in his eyes, was that I was wrong: I did have time. Because I’ve been making that time in order to work with Owen. And, in fact, I looked forward to working with Owen. The difference is that working with Owen is rewarding and satisfying, because Owen is smart and respectful and easy. Progress in the form of a single step brings me joy and excitement. And because of this, I work with Owen almost every day. Our sessions are always short — mostly because he is so quick that ending on a good note can sometimes mean being finished before we’ve even gotten started — and it’s true, I look forward to them. I use “Owen-time” as my own “carrot” to get through a busy day. And I am personally committed to helping this horse get a good start in life.

Sinatra, on the other hand? He’s a pain in the rear. He’s mouthy and easy distracted and — let’s be honest — infuriating. I am not a horse trainer by any stretch of the imagination, and I know that I do not have the skills to deal with a horse as “special” as Sinatra. If I’m successful with Owen, it’s because of Owen. He is an amazing animal. Sinatra is no less amazing, but his personality is completely different than Owen’s. So I will cut myself a bit of a break and confess that Sinatra’s behavior can be maddening, and mad is not the way to be around horses. So I don’t work with him on the ground, even though I know that I should. Even though I know that by not doing so, I am failing him.

But he’s been happy here with me and Honeycutt, so it’s hard to even think about taking him away from a situation he enjoys. But I know in my heart that he needs boundaries, he needs a job, he needs to learn better behavior. Fortunately, I also know that SAFE is blessed with a trainer on staff named Terry Phelps who does have the skill and the patience to work with a horse like Sinatra. Maybe when a few more successful adoptions happen for us, we’ll have room at Safe Harbor for Sinatra to return there. We try to reserve the limited space at SHS for new intakes and horses that are being ridden but Terry uses a great deal of ground work training with our horses, and they make remarkable progress in her program.

But the tough question remains: what does the future hold for a horse like Sinatra? Not sound enough for work, but unsuitable for a life of leisure. It’s a question we have to find an answer to. Right now, I have to go make sure Sinatra is still in his pasture.