Home from the Hospital! 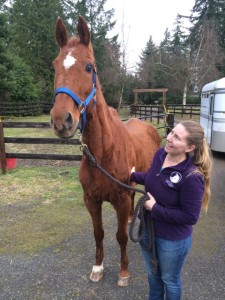 We welcomed Anakin to Safe Harbor Stables on Wednesday, a long awaited homecoming for everyone at SAFE. After four weeks at Pilchuck Veterinary Hospital, Anakin was released from their excellent care into ours. Finally strong enough to stand up without the aid of the hoist and sling, Anakin bid farewell to all his friends at Pilchuck and stepped into the trailer for the short journey home to SAFE.

Anakin left the hospital weighing nearly 90 pounds more than when he arrived. Now that he’s at SAFE, staff and volunteers prepare and serve him mashes and soft alfalfa at all hours of the day and night. He requires a LOT of care — in addition to the many feedings, he gets medications every eight hours, and because he’s confined to his stall when he’s not being hand walked, his stall is cleaned several times a day. Fortunately, all the volunteers are eager to help with Anakin’s recovery, so there are plenty of willing hands available to give him the care he needs.

Now that Anakin has made measurable progress down the road to good health, we’re turning our attention to some of his other needs. He was visited by our farrier a few days ago, who spent some time helping us create a treatment plan for Anakin’s right front hoof which is badly abscessed from lack of care. To prevent infection and aid with healing, Anakin gets twice daily pedicures that involve soaking, medicating, and wrapping the effected hoof. Fortunately it doesn’t appear to be causing him any pain or discomfort, but we had our vet out to x‑ray both front hoof to rule out the possibility of founder, which they did. Anakin also has a very cloudy left eye, which may be be the result of a past trauma or an autoimmune deficiency. On our vet’s recommendation, we’re treating it as uveitis, which means eye drops for Anakin every eight hours! He’ll be seeing an equine ophthalmologist as soon as we can get an appointment set up to rule out other possible causes, like glaucoma. It’s fortunate for all of us that Anakin is such a good and patient patient!

Many people have asked us how Anakin ended up in such terrible condition. Short answer is that we still don’t know. I have personally spoken with two of his owners and have been able to piece together a timeline for his life after the shutdown of the Equine Research Center at Cal Poly. Anakin left Cal Poly in excellent health and weight, and was adopted by a former student of the program. He had a brief career as a dressage horse, but was sidelined by an injury and was eventually sold to a family in California. He was in perfect health and weight at the time of that sale too. Five years later, his family moved to Alaska, and he was left in the care of relatives living in Elma WA. Six months later, he was reportedly given away to a young woman who answered a Craigslist ad for a free horse, and five days after that, he was signed over to SAFE. None of Anakin’s owners or caretakers in the last five years have admitted responsibility for his emaciated condition, and there’s been a lot of finger-pointing between them. Gray’s Harbor County Animal Control is still investigating this case of criminal animal cruelty, but we don’t hold out much hope that anyone will be held accountable for what happened to this horse. 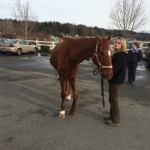 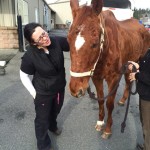 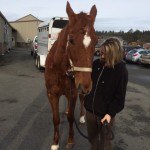 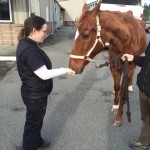 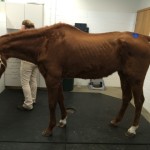 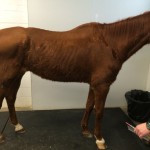 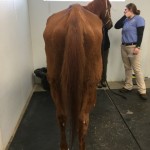 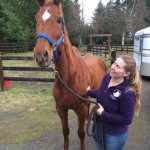 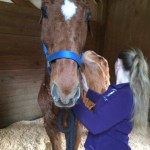